Amanda Ramsay writes about the latest in the “Save our NHS” campaign, ahead of a big weekend of campaigning, with the Lords voting on the health bill on Monday.

This weekend people across the country will take part in Save the NHS campaigns, in opposition to Tory and Liberal Democrat coalition plans in the health and social care bill. 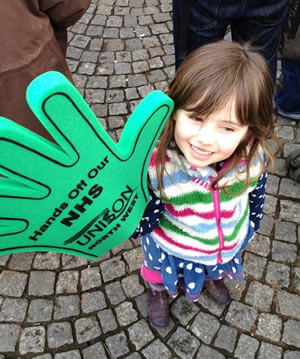 Opposed by the vast majority of healthcare workers and virtually every Royal College representing NHS professionals, the timing let alone the ideology could not be more wrong. Funding squeezes mean wards are closing and doctors and nurses are being laid-off, yet this reorganisation will cost at least £3billion.

Tories have tried to neutralise the countless warnings from healthcare professionals and the Labour Party, but those who have followed this sorry tale since 2010 know the truth – this bill, if passed next week, will mean the end of the National Health Service as we know it.

“The NHS doesn’t belong to David Cameron and Nick Clegg. It belongs to the people of this country and that is why we are doing everything we can to stop their ruinous plans for the NHS becoming law.

“Nobody voted for these changes. They are opposed by the public and by medical professionals across the country and these changes will cost over £3billion – money that will be taken away from frontline service at a time of acute need.

“The founder of the NHS, Labour’s Nye Bevan, said that there would always be an NHS as long as there was “folk with the faith to fight for it”.

“The next Labour government is committed to repealing this destructive Tory bill, but the fight is now upon people of all political opinions and none to fight against this bill and for the future of our NHS.

“It is not too late. We can still secure change and that is why we again call upon the government to see sense, listen to the public, listen to the medical professionals and drop this bill.”

Like campaigners around the country, Bristol South Labour Party will be out tomorrow with leaflets, asking members of the public to sign the Save the NHS petition. This will be presented in parliament on Monday. It currently stands at 555,261 signatures and counting – can you help reach 600,000 signatures today? Ask friends and family to sign too.

Working tirelessly on this campaign, Shadow Secretary of State for Health Andy Burnham and the shadow health team have toured the country, speaking to millions of people at rallies and public meetings but still the government will not listen.

Labour’s John Healey, Burnham’s predecessor as shadow health secretary, is something of a hero in this campaign too. Campaigning for the publication of the Risk Register, which assesses the dangers of this controversial bill, the government has been ordered to release it by the Information Commissioner in response to Healey’s freedom of information request from November 2010.

Healey pushed the case for transparency all the way to the Information Tribunal outcome last week. Risk Registers are not normally released to the public, but the tribunal took this highly unusual step due to the particular risks at stake, yet the coalition government still refuses to release the information it contains. Why?

So what can still be done at this stage in the legislative process?

“There’s both a lot and very little that Peers can do, at this very late stage.

“The government will accept the defeats it has had so far, during the Lords stage of the bill; the Commons won’t ping anything of that back at us after “Commons consideration of Lords amendments” next Tuesday.”

There will be two big votes at the start and end of Monday’s Lords Third Reading of the bill and these could be crucial.

“The vote at the start – on the Owen amendment on the Risk Register and whether Third Reading should proceed – will be determined more by how peers feel about the lack of transparency and open government issues shown by ministers on this matter.

“Many crossbenchers and a strong Labour whip will deliver numbers but it will inevitably come down to whether Lib Dems join us, sit on their hands (which would also help) or do their Pavlovian worst on hearing the division bell ring, and stride loyally into the Tory lobby.”

The bottom line is this: it ain’t over till the fat lady sings.

I for one will not stand by and stay silent. I’m taking part in a Save our NHS campaign day in Bristol South tomorrow morning from 10am, to talk to the public and explain what is at stake.

If you believe in the NHS and want to participate in campaigns this weekend, see what you can do.

It’s not too late to let Lords know what you think but you will need to move fast – the vote is on Monday. Campaigners have devised an ‘adopt’ a Peer mechanism which matches an individual at random to a member of the House of Lords and helps you contact them directly by email. Email a Peer today.