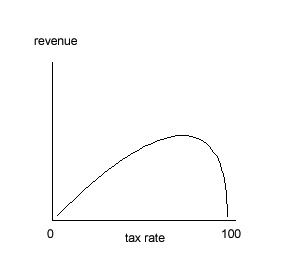 500 “business leaders” have written a letter to the Telegraph today, encouraging George Osborne to drop the 50p tax rate. The letter is short – dwarfed by the list of names – and doesn’t really attempt to make much of an argument.

Their main claim is that:

The 50p tax is set to reduce government income, and damages the economy, the public services and charitable giving.

This claim is hard to back up with empirical evidence. As we reported last month, the HMRC’s best estimate is that :

The first year of [the tax rate’s] introduction led to a “surge” in revenues of hundreds of millions of pounds.

Without data to support it, the signatories have had to resort to trotting out discredited economic theories when they have defended their letter on TV and radio. The phrase of the day is “Laffer Curve”.

• At an income tax rate of 0 per cent, the income tax revenue will be £0, because no tax will be taken in.

• At an income tax rate of 100 per cent, the income tax revenue will be £0, because no one would do any work if they didn’t get paid.

• Somewhere between 0 per cent and 100 per cent is a tax rate which maximises income tax revenue.

From this, Andrew Arthur Laffer and the signatories of todays letter draw the conclusion that cutting income tax will encourage people to work harder, and increase revenue.

Unfortunately for them, we now know where on the curve revenue is maximised – and it’s pretty far away from 50 per cent.

Christina Romer and David Romer have a new paper looking at evidence from the 1920s and 1930s and find that the revenue-maximizing rate on the highest earners is extremely high—over eighty percent.

Among the top 0.05 percent of the income distribution they find an elasticity of taxable income of 0.19 percent which implies “that tax revenues would be maximized with a tax rate of 84 percent; that is, you could raise taxes up to 84 percent before people’s reduced incentives to make money would compensate for the higher tax rates.”

Other economists put the peak closer to 76 per cent.

Either way, if you want to maximise revenue, the 50p tax rate is about 25p too low. The Institute of Directors may want to think twice before bringing up the Laffer Curve in support of tax cuts any time soon.

41 Responses to “Memo to 50p tax trashers: Laffer Curve peaks at over 75 per cent”