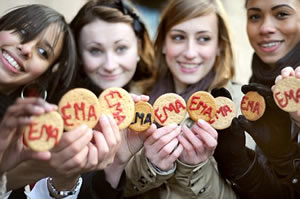 Ken Livingstone’s announcement today that if he is elected in May he will reinstate a London wide EMA is not just good policy, it’s good politics. The EMA was a proven policy that helped London teenagers get the qualifications they need to get into work.

On the day Ken has announced this commitment to reinstate the EMA, the current mayor of London is calling for an end to the 50p tax rate, basically a tax cut for himself and other already wealthy people. It is getting harder to tell if Boris is the mayor of Londoners or the mayor of bankers.

This is good policy, because the weight of evidence supporting EMAs far outbalanced the arguments of all naysayers. For example, research by the Institute for Fiscal Studies shows attainment at GCSE and A-level by recipients of EMA rose by five to sevenpercentage points since its introduction, and by even more for those living in the most deprived neighbourhoods.

In addition, RCU Market Research Services carried out research on the national scheme and published a report, Evaluation of the EMA National Roll-out 2007, which concluded:

EMA is reducing NEET (those not in employment education or training) and also motivating learners to work harder.

Ipsos MORI published a report in 2008 called Evaluation of Extension of Education Maintenance Allowance to Entry-to-Employment and Programme Led Apprenticeships. This report reached similar conclusions to the RCU research:

As Save EMA has pointed out, teenage unemployment is rising and the numbers of those classed as NEET are rising nationally. And the London is above the national rate for youth unemployment.

This is good politics too, and could prove to be a game changer in the London Mayoral elections. One YouGov poll last year showed that almost half of all Londoners opposed the abolition of EMA; with 50 per cent of those who voted Lib Dem in 2010 opposed to its abolition, and almost 30 per cent of Tory voters at the last election.

This would suggest this could be a potential swing voter issue.

Also, nationally over half of young voters were unregistered at the last election and around half of young people who are, do not vote. One would assume in London this is the same. But in a city like London with a large young population, the youth vote is a potential sleeping giant. And today’s policy announcement could awaken it. But at the very least it is a positive message to young people and could galvanise their parents who will want the best for their children.

Nevertheless, EMA was always about priorities and not the cost of the scheme and today shows a lot about the priorities of the candidates. Because at the very least what this policy shows is that there is now a line in the sand between Ken and Boris.

On one hand there is Boris, who takes six months to pick up a phone to register his complaint with a London based MP, Michael Gove, about a scheme affecting almost 100,000 Londoners. And since then Boris has said more words in Greek and Latin than on EMA and even more defending bankers.

On the other hand, there is Ken Livingstone who spoke out against the cut almost immediately and supported our campaign, who today has announced a bold policy to show that he will reverse this most pernicious of cuts on the poorest Londoners.

So it is now clear for Londoners: If you want to Save EMA then you have to vote Ken in May.