Sam Bacon, of the Global Poverty Project, urges the chancellor to commit to the 0.7 per cent target of UK GNI to be spent on international development.

Sam Bacon is a campaigns officer at the Global Poverty Project

It’s budget week, and with the chancellor outlining his plans at a time of rising unemployment, continued difficulty in the eurozone and low consumer confidence, all government spending will face significant scrutiny – but a proposed 0.7% of expenditure has attracted particular controversy. 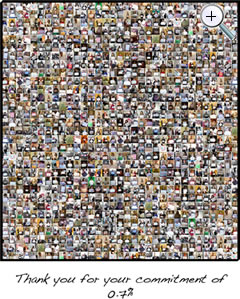 A few weeks ago, headlines were dominated with a report that an opposition politician in India claimed the country neither wanted nor needed British aid.

Despite being a comment from a parliamentary debate in 2010, this triggered a wide ranging discussion of whether spending money on international development is still a justifiable option in the current fiscal climate.

The Daily Mail, Daily Telegraph and others jumped on this story to put pressure on the government to cut the aid budget, trying to define public opinion as having turned against the UK being a provider of life saving aid.

However, this negative outlook is only one side of the story.

At the Global Poverty Project, we work to increase the number and effectiveness of people taking action to end extreme poverty, and over the past few months we’ve spoken to more than 3,000 people across the UK about international aid and the work of the Department for International Development.

From these conversations we know that public opinion on whether the UK should support the world’s poorest people is a long way from that reflected in media headlines.

• Campaign launched to commit UK to spending 0.7% of income on development aid 3 Feb 2010

We know that when asked what amount of UK GNI is spent on international development, people tend to suggest anything from 10% upwards. When they are told that the actual percentage of GNI spent on aid is less than 1%, often many members of the public become very supportive.

And as the report (pdf) launched yesterday by the One campaign demonstrates, when spent well, the results we get for the less than 1p in the pound we spend on international development helps save lives, stabilise communities, and give people the support they need to sustainably move out of extreme poverty (defined by the world bank as living on just a pound a day).

As ever in politics though, policy is not just based on what is known, but is based on what is shown. So here at GPP we launched our ‘Protect Point Seven’ campaign a couple of weeks ago to mobilise the positive support for international aid that exists across the country, and to show the government that breaking our international agreement to spend 0.7% of GNI on aid would be a deeply unpopular choice with the UK public.

In just a few weeks the response to our campaign has been amazing, demonstrating the genuine public support for life saving aid.

Hundreds of our supporters have written to their local MPs to express their support for UK aid, tweeted at their MP, and 15 of our campaigners even took a day off work to meet with Shadow Secretary of State for International Development Ivan Lewis MP and Secretary of State for International Development Andrew Mitchell MP, to give them a personal thank you for their support for their parties’ commitment to keeping 0.7% in the budget.

The level of energy our supporters have brought to the campaign has been impressive, with a our Global Poverty Ambassadors starting a Facebook group to galvanise support online. This page has reached nearly 5,000 people, and in just a few weeks, more than 350 people have posted pictures of themselves saying thank you to all three mainstream parties for their support of aid spending.

Our supporters and campaigners have energetically and passionately set about proving to decision makers in Westminster that the public support efforts to end extreme poverty, and do not want to see the good work of DFID cut.

UK aid has lifted a billion people out of poverty since 1990, and through initiatives like the Global Fund, helps save 4,000 lives a day.

Tomorrow, we’re hoping George Osborne has been listening to this UK-wide message of support for our 0.7% spending target and keeps the UK’s promise of support to communities across the world. If he doesn’t he will be progressing with a deeply unpopular cut to a vital lifeline to some of the world’s poorest people.

25 Responses to “International development: The UK’s most popular ‘unpopular policy’”