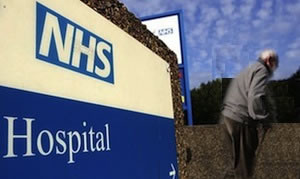 The government today lost its appeal against keeping the NHS Risk Register secret. The Information Tribunal upheld the Information Commissioner’s earlier ruling, and said the Department of Health must release the document “immediately”.

Former shadow health secretary John Healey, who has long campaigned for the release of the register, said ministers must “respect the law, release the risk register in full and let people make up their own minds on the NHS changes”.

“Today’s legal judgement must put an end to the government’s efforts to keep this information secret. They have dragged out this process for 15 months, while Parliament has been legislating for their NHS plans.

“It’s near the end of the eleventh hour for the NHS bill and Parliament rightly expects this information before it takes the final irrevocable step to pass the legislation.”

Reports suggest the Risk Register will warn that the NHS shake-up will “endanger patients, lead to staff cuts and do lasting damage to the reputation of the service”, while the NHS London risk assessment (pdf) of the top-down reorganisation of the NHS warned of the damaging effects of the reforms on the health service in London.

There is a risk that, during the transition to a new end-state for decision-making processes and accountability, there may be insufficient focus to deliver the necessary transformation at pace.

This applies both to existing changes that are agreed but not yet fully implemented and to proposed changes that will emerge over the remainder of 2011.

The consequence of this risk could be that the transformational changes in health services envisaged in London’s QIPP plans in response to the clear clinical case for change, may not be realised in full or are delayed, thereby undermining significant improvements in the health of Londoners.

The fight over the release of the Risk Register has been going on for almost 18 months now. It started in November 2010, when John Healey requested a copy. In December that year, he was rejected, and his appeal took until July 2011 to conclude.

In November last year, he made a second request to the Department of Health, under the Freedom of Information act. The government again stalled, and, after the information commissioner ruled in Healey’s favour, took the appeal to a tribunal. It is to be hoped that there will be no further stalling and the government releases the register forthwith – lest we be forever wondering just what they’ve got to hide.

• Being aware of the risk, how can the government carry on regardless? – Jos Bell, February 25th 2012