The Rangers administration process is grinding on, with the odd hiccup, but no clear end in sight. 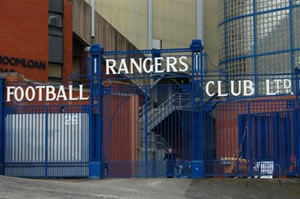 The administrators (Duff and Phelps) have managed finally to negotiate significant reductions in player wages, albeit with conditions of release come the next transfer window.

A fighting fund has been set up to elicit donations and various fundraising games have been proposed.

Plus, in a possible harbinger of things to come, four-way legal proceedings are underway in London to recover funds that may or may not be due to Rangers, whilst in Edinburgh the administrators are seeking to escape their deal with Ticketus – although Ticketus are also part of a consortium (‘The Blue Knights”) bidding to buy the club.

• Labour: Anti-sectarian legislation is right in spirit, but flawed in execution 7 Nov 2011

As I wrote before on Left Foot Forward, whilst we do not know the facts of the “big tax case”, many details of Rangers’s employee benefit trust (EBT) scheme are now public knowledge.

The EBT was essentially an offshore tax-dodge that Rangers say was perfectly legal but that HMRC say was a form of wage and hence liable for personal taxation.

Former director Hugh Adam has confirmed to the Daily Mail that they existed way back into the 90s, were separate to the normal wage contracts shown to the SFA/SPL, and were common knowledge to other directors at Rangers. The Scottish Sun on Sunday went one better by publishing a redacted version of the contract.

“The truth” and “the truth”

Following these and other recent revelations, previous Rangers owner Sir David Murray (together with Mike McGill, former director of MIH, Rangers’s then parent company) has now broken cover to pass on his views to a select panel of journalists.

He has a different view of the EBT scheme administered by his company MIH on behalf of Rangers:

“There was no double contract. There was categorically no dual contract.”

“That is key to the defence, and key to the allegations made by the SFA.”

These statements don’t seem to fit with the known facts. What can they mean?

Firstly Murray and McGill seem to be asking people to believe the contract sent to the SFA/SPL is the only “real” contract and the EBT document published recently in The Sun is not a contract of payment for playing football, rather something they call elsewhere a “letter of intent”.

If you haven’t already, take a moment to read that document and then judge for yourself – before the First Tier Tribunal (FTT) of the Tax Chamber delivers its own verdict.

Secondly we are asked to believe that as the EBT documents are not contracts of football payment, they don’t need to be submitted to the football governing bodies the SFA and SPL. Indeed, if they had been submitted then this would be tantamount to an admission that the EBT were contracts for playing football and hence liable to further taxation – which according to Sir David they were not.

Unfortunately, even if the FTT accepts this sophistry this does not excuse Rangers for not lodging the EBT with the SFA or SPL. The SPL rules preclude football-related payments out with the contracts that are lodged with them (Rule D9.3, pdf), whilst in a neat pincer movement, the SFA rules state that all football-related payments must be in the contract lodged with them (Article 12.1, pdf).

Perhaps a lawyer may be able to find some ambiguity in the wording of these rules. Personally though, I don’t think the wording is accidental; they seem precisely intended to prevent opaque or hidden financial shenanigans such as EBT. Smaller clubs are regularly expelled from SFA competitions and punished for fielding ineligible players due to trifling errors in paperwork.

Nothing to see here

All of this is widely known but much of the media in Scotland is doing its damnedest to ignore, deflect, or just muddy the waters.

But the story is drifting out of their control as evidenced by a curious little Twitter storm surrounding Channel 4 News chief correspondent Alex Thomson – @alextomo – on Tuesday:

“SFA say President Campbell Ogilvie is ‘distancing himself from the current Rangers investigation’ but did not explain how.

“Campbell Ogilvie ‘did not know’ about EBT contract when he was Rangers FC secretary?

“When we asked why not – that was his job – SFA said they didn’t know.

“Interesting SFA have just accused me of ‘lying’, ‘pig-headedness’ and then put the phone down mid-conversation…

“And suggested there might be a perceived conflict of interest in his current position until the investigations are complete.”

Here we see that Alex Thomson has broken the unwritten rules of Scottish sports journalism. He has asked a pertinent question of the SFA and when he got a nonsensical answer, and was refused an interview, he told people about it.

So later that evening BBC Scotland’s chief football reporter Chick Young, after an off the record chat with Campbell Ogilvie, showed him how it was done. Unfortunately Chick overstepped the mark and rather than just waffle that Campbell Ogilvie was a victim of a “whispering campaign” he misspoke himself and publicly repeated on-air the falsifiable claim made earlier to Alex Thomson: that Campbell Ogilvie had no EBT.

Of course Campbell Ogilvie did have an EBT and after successfully avoiding any questions for weeks he had to admit this the next day. In true Scottish BBC style Chic was not in the least offended at being misled or made to look a fool and so the next night he claimed Campbell Ogilvie had benefited “less than a good night out” from his EBT. Yesterday, however, Campbell Ogilvie further admitted he received £95,000 from the EBT scheme.

And still he maintained this was not a problem. He (as company secretary) didn’t administer contracts at Rangers – following the Murray explanation he says there were no dual-contracts – and he hasn’t been asked to explain anything by the SPL inquiry into EBT. Nothing to see here. The Sunday newspapers attached no editorial comment to his statement.

To get a man to understand something

Night after night, weekdays on Scottish radio the football phone-ins (Superscoreboard, Sportsound) attract hundreds of thousands of listeners. Many of the pundits are also chief sports reporters, editors and editorialists on Scotland’s newspapers – and their job, which they do very well, is to infuriate people into tuning in night after night.

Now, however, the pundits are floundering. For years they have dealt with people calling in to rant about goal-line technology, and diving foreign players and who would win the league (Rangers or Celtic) – but now they have lawyers, accountants and businessman calling in to belittle them and their newspapers for their ignorance or evasiveness.

Through their credulous support of previous owners David Murray and then Craig Whyte they have lost the trust of Rangers fans, whilst Celtic fans believe they have simply moved on to fronting PR for the new administrators Duff and Phelps – or any suitor who might offer them a positive angle. Other fans think even less of them.

All of this would be a laugh if it were just about football.

In truth, though, the Rangers story is about tax avoidance, credit crunch institutional corruption, and of course media failure. The pundits have done Rangers and Rangers fans no favours by ignoring their evident plight until they were at the brink of disaster. Now the SFA and SPL are mired in allegations of corruption at the very top, they do not want to investigate and have taken to labelling evidence, rules, and logic as “rumour”, “insinuations” and “innuendo”.

There are many good young sports reporters and excellent business journalists in Scotland. They need to grab the agenda from the pundits on the sports desk, and remember their primary purpose: to hold power to account.

35 Responses to “Rangers: How journalists and administrators failed the fans”