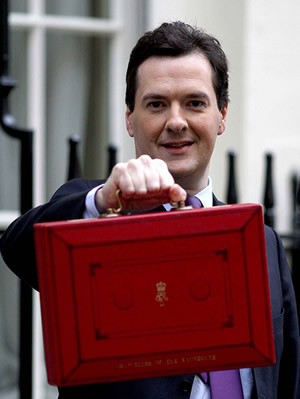 One of the key commitments the Conservatives made in the run up to the last election was to move toward the UN target for developed countries to allocate 0.7 per cent of their GDP to aid.

Taking such a contentious issue ‘off the political table’ – however reluctantly – especially at a time of austerity, was a brave decision. So in 2010/11, the UK donated £9Bn to poor countries.

However, now chancellor Osborne is considering changes in the upcoming budget that will allow multinationals avoid paying £4bn to poor countries in tax.

Let’s say a UK company sets up subsiduaries in a number of other countries, including a tax haven, and shift the profits from the main company and other subsiduaries based in developing countries to the tax haven.

Without the CFC rules, the multinational would avoid paying corporation tax in the UK which is currently held at 25 per cent, or in any of the other non-tax haven countries which hosted a  subsiduary.

But under theses rules, the multinational is taxed by the UK government the equivalent of what it would have paid if it had faced the UK corporation tax rate in all jurisdictions.

“If the government pushes forward with these changes, the world’s poorest countries are in danger of becoming the collateral damage.  Based on the current economic activity of UK multinationals in the developing world, ActionAid estimates that poor countries may lose as much as £4 billion in tax revenues a year.

” There’s a cost to the UK too. Treasury estimates show that this new loophole is likely to cost £1 billion a year by the end of this parliament. This is part of the government’s “corporate tax roadmap” under which large companies will eventually receive a total annual tax cut of £7 billion.”

If these changes go through, we will have the UK government setting back years of progress of developing countries moving off aid and onto tax receipts to support themselves. Moreover, we will be absurd situation whereby a market trader in Zambia or Ghana will pay more in tax than multinationals that operate in that country like brewing giant SABMiller or commodoties trader Glencore.

As the campaigning charity outlines, the scale of the change is massive:

“ActionAid research (pdf) showed that 98 of the FTSE 100 largest companies on the London Stock Exchange have subsidiaries in tax havens. Eighty-two also operate in the developing world. We found a total of 8,492 subsidiary companies in tax havens, as well as 6,163 in developing countries.”

But worse still, the generosity of UK taxpayers will not be being used improve the lives of the poorest, but partially offset the tax avoidance of some of the largest companies.

It will turn the aid budget into effectively a massive subsidy for multinational companies – and a £1billion loss to the public exchequer as well at a time when we are meant to be ‘all in this together’.

• How do we build a better future with Somalia – Rushnara Ali MP, February 23rd 2012