Carl Packman blogs at the Though Cowards Flinch blog

George Galloway, the new MP for Bradford West, could hardly contain his satisfaction in the early hours after it was reported he had won his election campaign. “By the Grace of God”, he opined in a tweet, “we have won the most sensational victory in British political history.” 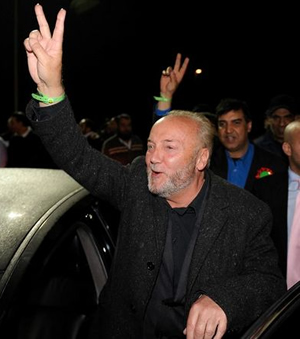 Before long it was being dubbed the Bradford Spring, the implication being that a despot was ousted while a rainbow coalition of groups has united in search of the goal of democracy.

But unity was the last thing Galloway had on his mind when he took to the road.

Reading around I found that the Muslim Public Affairs Committee, an organisation that wants to empower “Muslims to focus on non-violent Jihad and political activism”, who naturally support Galloway and Respect, had published a blog post on the Bradford West Labour candidate Imran Hussein, describing him as “thirsty”, dishing out ad hominem attacks, relaying childish jibes that Hussain “might have to rely on his trusted pals John E Walker and Jackie Daniels to give him a hand”.

One of course would naturally assume that this level of politics be beneath the anti-war firebrand. But of course this turned out to be false.

When I spoke to one Labour activist who travelled from London to Bradford to join the campaign against Galloway, he described Respect’s campaign as “vile” – not least because of the personal letter sent around by Galloway claiming:

“I, George Galloway, do not drink alcohol and never have. Ask yourself if you believe the other candidate in this election can say that truthfully.”

Addressing the “voters of the Muslim faith and Pakistani heritage in Bradford West”, Galloway felt it apt to write:

His references to his Labour opponent as a “Muslim” in inverted commas made it obvious he wanted the “Muslim faith and Pakistani heritage” vote because he was the real Muslim candidate, which Labour rightly responded to as a “bizarre and deeply insulting letter”.

While on the trail Galloway also dragged out of the woodwork supporters of note, namely Carole Swords and Yvonne Ridley. Swords, chair of the Tower Hamlets Respect Party, was convicted in February for slapping a Jewish man during a boycott protest at a supermarket.

Making the line between anti-Semitism and anti-Zionism even thinner she was previously found to have written on Facebook that Zionists are “cockroaches” who “hide in the dark and try to create havoc where they lay their eggs” and that those “slimy, vile, hard skin bugs need to be stomped out”.

Yvonne Ridley, on the other hand, who is reported once to have said she’s “quite a fan of Mahmoud Admadinejad who is adored by the common man and woman in Iran”, and that “Zionists have tentacles everywhere”, told supporters of Galloway’s campaign recently that sentences handed to young men after the Bradford riots represented an “apartheid-style justice that we haven’t seen since the days of South Africa”.

With the “most sensational victory in British political history” and comparisons to South Africa, Bradford ought to feel like the centre of the universe.

But in the age of austerity it drew a cheap politician.