Richard Serunjogi of the Labour Campaign for International Development lays out the stark consequences of any failure to meet the 0.7 per cent aid target.

By Richard Serunjogi of the Labour Campaign for International Development (LCID)

In the past few weeks many commentators on ConservativeHome have called for cuts to the UK’s aid budget. In the run-up to the annual budget this type of speculation and rumour about government spending is hardly news. 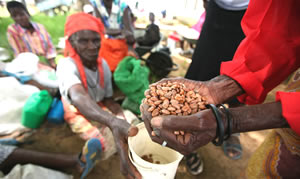 However, the analysis of what would happen if the coalition government retreated from its commitment to spend 0.7% of national income on aid from next year has been largely fact-free.

A useful new report (pdf) from the ONE campaign helps to redress that balance by examining exactly what UK aid will do over the next four years if spending plans aren’t changed.

The numbers are hugely impressive.

They estimate that by getting to 0.7% the UK will:

• Help 77.6 million people access formal financial services, such as bank accounts or credit, which are the basics needed to start a business;

• Ensure 5.8 million births take place in a safe environment, saving the lives of more than 50,000 mothers.

These findings allow a much greater scrutiny of proposals from the likes of Ruth Porter, Matthew Sinclair and Ruth Lea.

Ruth Porter, who arbitrarily describes all development aid as “largely ineffective”, wants aid to remain at 0.5% of GNI. This would mean a cut of nearly 30% to the Department for International Development’s budget as proposed in the Comprehensive Spending Review.

To put it another way that is 4.8 million children who won’t have access to a basic education.

Ruth Lea proposed going even further and cutting the aid budget, which she believes has been protected “for political positioning purposes”, to £5 billion.

This would mean a 57% reduction in next year’s aid budget, or 3.3 million mothers giving birth with no skilled attendant than would otherwise be the case.

Even Matthew Sinclair’s proposal to freeze the aid budget at current levels in order to “take the heat out of public frustration that international development is getting better treatment than budgets here at home” would mean a 26% reduction in what UK aid could deliver, or 20 million children being denied life-saving vaccinations.

ONE’s research has allowed the tables to be turned on right-wing commentators whose attacks on the aid budget had previously been allowed to be discussed in monetary terms only.

During my Winston Churchill fellowship last year, I had the privilege of witnessing the great impact of UK aid first hand, and the stark reality is people’s lives are at stake if the government breaks its promises on aid – and it is hugely positive that no longer will this fact be allowed to be masked by a lack of information about what aid can really do.