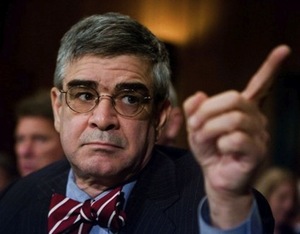 We’ve all heard arguments over whether or not Greece should leave the euro, accept massive austerity, or try to push Germany into taking a haircut on their debt.

What we haven’t heard is those arguments presented by a fiery upstate-New-York macroeconomist who can barely keep his language to a broadcastable level, and certainly not a broadcastable volume.

When you have, everything suddenly becomes clear.

Dr. Peter Morici is a macroeconomist at the University of Maryland, and he was on Radio 5 to talk about the unfolding situation in Greece. While the transcribed remarks below get some of his attitude across (with liberal use of all-caps), to really appreciate the majesty, listen to the recording at the bottom of the page.

From the off, it was clear it was going to be an interesting interview.

Morici, who was preceded by a clip of William Hague, began by saying:

“His comments create the supposition, or are based on the supposition, that the austerity program will work and that they’ll be able to repay their remaining debt… What Germany is doing is sacking Greece…

“This is like Marie Antoinette saying let them eat cake. I THINK WE SHOULD DRESS ANGELA MERKEL UP IN PERIOD COSTUME, BUSTLE AND ALL! But basically, she’s asking Greece to wear the corset. This is an absolutely absurd situation…

“The Germans, with their 32.5 hour work week, have been able to tell the rest of the world that they’re smarter than God for having export led growth…

“Is Germany willing to let BMW factories move to Greece so that [Greece] will produce the goods necessary to have the exports needed to pay off the German banks? Then we’ll know Merkel is serious.

“Greece needs austerity, I don’t deny that. But so does Germany… They’re telling people you have to take these terms and there’s no backing out, and Germany isn’t willing to do CRAP to fix it.

“It was the peak of irresponsibility for your foreign secretary to characterise these problems the way he did.”

Mixed in with the mild profanity and loud hyperbole are some strong arguments about why (Greek) austerity is doomed to fail. Worldwide export-led growth is self-evidently impossible, but that hasn’t stopped governments building policy around it.

15 Responses to “‘What Hague had to say was absolute crap’: A masterclass in economic communication”