George Readings reports on the launch of the Times’s campaign to make life easier for cyclists in London and all around the country. 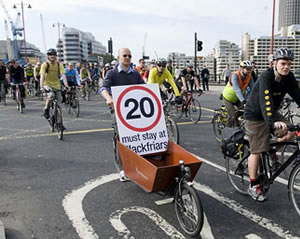 The Times yesterday launched its ‘Save our Cyclists’ campaign. It comes after Mary Bowers, a young journalist at the paper, was hit by a cement truck outside King’s Cross one Friday morning as she made her way to work; she remains in a coma.

Unfortunately, her case is all too typical. Lorries make up five per cent of all traffic on British roads but, according to some estimates, are implicated in 50 per cent of cyclist deaths.

King’s Cross is also a particular hotspot. In December, TFL promised to review the junction there after the fourth cyclist in four years was killed by a lorry. Far from being a priority, no changes were promised until after the Olympics.

Similarly, two cyclists were killed in late 2011 at Bow Roundabout in east London. Both were using the new ‘Cycle Superhighway’, but a poorly designed junction left them vulnerable to other traffic.

It was left to Labour London Assembly member John Biggs to highlight the way cutting commuting times for car drivers was being prioritised over cyclists’ lives:

“TfL have previously said that there is nothing that they can do to make the roundabout safer, without causing traffic jams.

“It is time they bite the bullet and accept longer journey times for motorists in exchange for keeping pedestrians and cyclists safe.”

TFL finally launched a consultation last month on how to improve cyclist safety at Bow Roundabout.

These cases underline why the Times’s campaign is so important. At both Kings Cross and Bow Roundabout there are some provisions for cyclists, but they haven’t been implemented in a way which actually keeps people safe.

In total, 16 cyclists were killed in London last year, many of them by lorries. Dozens more, like Mary Bowers, were badly injured. Despite the commonly held belief (based on a statistical anomaly in 2009), the majority of cyclists killed were men, not women.

Outside London, things are often even worse.

Cyclists passing Edgbaston Cricket Ground in Birmingham, for example, are allowed to share the pavement with pedestrians for quite some distance. Then, without warning, they are forced onto a  ‘cycle path’ (a foot-wide strip of green paint) crammed onto the edge of a busy dual carriageway. Ten metres later, the cycle path promptly disappears and cyclists are on their own again.

The Times has identified eight key points to make British roads safer for cyclists; these include:

• Trucks entering a city centre should be required by law to fit sensors, audible truck-turning alarms, extra mirrors and safety bars to stop cyclists being thrown under the wheels.

• The 500 most dangerous road junctions must be identified, redesigned or fitted with priority traffic lights for cyclists and Trixi mirrors that allow lorry drivers to see cyclists on their near-side.

Cycle groups have been making these points for years. Perhaps now, with the backing of a major national paper, TFL and local authorities will start to listen. If they don’t, cyclists will continue to pay with their lives.

19 Responses to “As Times launches Save our Cyclists campaign, perhaps now TfL will listen”