Mark Thompson reveals new evidence that the government is focusing on dogma over harm reduction, as they explicitly reject a campaign which would reduce harm. 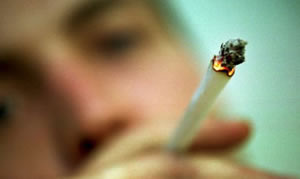 In engaging with the debate about drugs policy with politicians and ministers you regularly find that they will claim there is no contradiction between encouraging abstinence of substances and reducing harm. They insist that their policies are compatible with harm reduction.

I have come across evidence that this simply is not true.

The UK Cannabis Internet Activist website has been trying to engage the Department of Health in a discussion about running a campaign designed to reduce harm caused currently by the propensity of those taking cannabis to smoke it with tobacco. They have launched a campaign called Tokepure which encourages people to not do this and is trying to educate people about the issue.

Predictably though, the government is not interested in helping with this campaign.

Derek Williams of UKCIA wrote to Anne Milton the responsible minister via his MP and received the standard templated reply explaining the government’s position on drugs and explaining that there is not to be a campaign run from government along these lines.

Mr Williams replied, explaining in his own words:

“…The very obvious reasons why getting cannabis users to drop the tobacco would be a good idea, supporting my case with reference not only to population studies of cannabis users, but also to information put out by her own department.”

The reply Mr Williams received from Ms Milton included this snippet which is instructive:

If, as Mr Williams suggests, we were to advocate that people smoke cannabis without tobacco, we would be … putting people at risk of harm.

This seems quite bizarre. Mr Williams went out of his way in his correspondence to make it clear that he would be happy with a campaign that simply told people not to mix tobacco with cannabis, not a change in government policy to cannabis use itself which Mr Williams fully accepts can itself be harmful. His point is, it is more harmful still to use cannabis with tobacco.

Cannabis can damage both physical and mental health and it would be irresponsible for anyone to suggest there is a “safe” way to smoke cannabis.

This would appear to completely miss the point. Mr Williams is not saying smoking cannabis without tobacco is safe. He is saying it is safer. Surely this is a trivial and obvious point?

The thinking behind her position becomes clear later in this second reply though:

The thinking however is hopelessly muddled. The two things are not contradictory. Both cannabis and tobacco can be harmful (or in the minister’s words “dangerous”). That does not negate the fact that smoking them together is more harmful.

Sadly what this reveals about government drug policy and its approach to harm reduction is that it is driven by dogma.

For all the claims that its policies are compatible with harm reduction this is shown to be untrue here. Smoking cannabis with tobacco is more harmful than just taking cannabis. That is a fact. Yet because of the “just say no” approach the government takes it refuses to acknowledge this for fear of “the message it would send out”.

It is worth bearing this in mind the next time a minister claims they are in favour of reducing harms caused by drugs. Their record suggests that in practice this is not the case.

You can read Mr Williams’s full exchange with Ms Milton and his thoughts on it here.

• The current approach to drugs has gone to pot – Mike Morgan-Giles, November 19th 2011

• On drugs policy, the government should do what the evidence tells them – Dr Michael Shiner, June 5th 2011

• Government should listen to its advisers on drugs policy – Mark Thompson, September 14th 2009