Declan Gaffney examines Progress' report on the support for benefits cuts in depth, and finds that it doesn't show what it purports to show 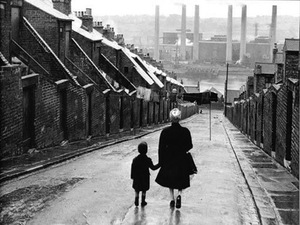 ‘The end of welfare?’ is the headline on the current issue of Prospect magazine, illustrated with a celebrated Bert Hardy photograph from the 1950’s – which is appropriate, as the first occurrence of that headline probably dates from the same period.

The main story is by Peter Kellner, and is a lot more nuanced. His main argument is that coalition welfare reform is strongly in tune with public opinion.

Drawing on a specially commissioned Yougov poll, he says (£):

‘The public’s verdict is emphatic: We think the current system is too expensive. We asked: In general, do you agree or disagree with this statement ‘The Government pays out too much in benefits; welfare levels overall should be reduced?’ …A huge majority, 74 per cent, agrees; only 17 per cent disagree.’

But however much the public may dislike social security spending in the aggregate, fitting that general attitude to concrete proposals for reform that will yield major savings while still reflecting the detail of public opinion is a different matter. This, to me, is one of the clearer lessons from Yougov’s detailed polling questions.

Thus, while the coalition aims to cut Disability Living Allowance expenditure and caseload by 20 per cent, the poll shows the majority want expenditure to stay where it is or increase – even if that means higher taxes – while only 11 per cent favour cuts.

This is one of the major new findings of this poll, and why Prospect didn’t make more of this glaring mismatch between the coalition’s welfare reform bill and public opinion baffles me.

The poll also showed minorities, ranging from 9 per cent to 23 per cent, in favour of cutting pensioners’ benefits, benefits to the low paid and child benefit for families paying standard rate income tax.

Strong support for cuts was confined to only two of the six types of benefit (or rather of recipient) that Yougov asked about: unemployed people and unmarried single parents, where 42 per cent and 44 per cent favoured cuts.

So the focus of the demand for cuts is not ‘welfare’ as a whole, but out-of-work benefits to non-disabled people.

How much does the UK spend on these benefits, and how much has expenditure increased over time? Kellner cites growth in overall social security expenditure from 5 per cent of GDP in the early 1950’s to 14 per cent today, but this is of little relevance until we know how much of this growth has gone to unpopular as opposed to popular spending.

Answering this question means sorting through the data on social security expenditure and extracting information on the benefits people seem to dislike most – or that go to the people they dislike most –  while excluding spending on items (or people) they do like.

The chart below shows expenditure on the main out-of-work income replacement benefits for working age people: unemployment, invalidity and social assistance benefits and tax credits to out of work families.

Note that because this includes invalidity benefits, there is a lot of expenditure on disabled people included here (more than half of recipients of these benefits are currently receiving DLA, which puts them in a category the public favours, as we have seen.)

As of 2009/10, the UK was spending 2.37 per cent of GDP on these benefits. This was almost exactly what the UK was spending thirty years earlier in 1979/80, and a lot less than in most years since then. Bear in mind that this was after the biggest collapse in GDP since the great depression.

Comparisons with years before 1978/9 are less robust because we can’t exclude some payments to pensioners from the data prior to 1978/9 (although this really does not seem to make a huge difference to the trends).

With that caveat in mind, we can say that expenditure on these benefits as a share of GDP prior to the recession probably wasn’t very different to the early 1970’s. The popular notion that the UK has been spending record amounts on these benefits in recent years is the opposite of the truth. 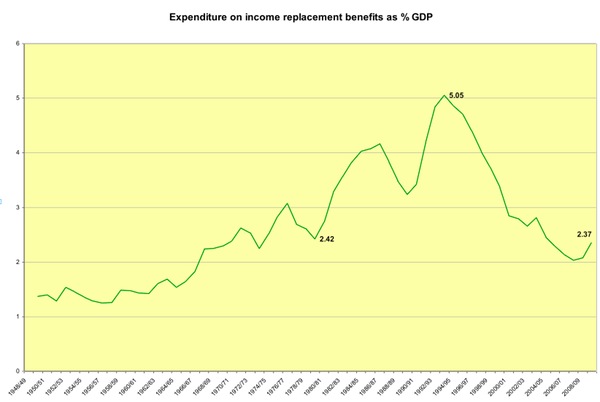 I expect these figures to be greeted with disbelief: three broad points might help with any confusion.

The first is a reminder that expenditure is expressed as a share of GDP: obviously if expressed in cash terms, with or without adjustment for inflation, the trends would be different.

Secondly, as the chart shows, expenditure on these benefits did increase dramatically at various points during the late 1970s, 1980s and early 1990s, and these successive rises were usually only partly reversed during periods of prosperity until the turn of the new century, so the reversion to 1970s levels of spending is a very recent phenomenon .

The third is that housing benefit, one of the few major sources of growth in out-of-work benefit expenditure, is not included in the chart, which is confined to income replacement benefits intended to cover other basic living expenses.

Why has expenditure fallen so much?

Partly it’s because there are a lot fewer people on out-of-work benefits than there were in the mid-1990s (by about 1.2 million).

But that can’t be the whole story because while there may be lower reliance on out-of-work benefits now than in 1995, that doesn’t hold if we compare with the 1970s and 1960s. The key to the puzzle lies in the declining value of these benefits over time, largely due to the fact that from the 1980s they were uprated with prices rather than with earnings or GDP growth.

So these benefits, contrary to what seems to be widely believed, have been falling ever further away from average living standards over time. Alternatively, and this is just the same thing phrased differently, the U.K. got a lot richer and was better able to afford these benefits.

The problem with simplistic calls to cut ‘welfare’ therefore is that the elements that people don’t like represent ony a fraction of expenditure, and one that was in long-term decline until the recession. In fact, the benefits included in the chart account for only 16 per cent of all ‘welfare’ expenditure.

This is what our political classes are in denial about: on all sides, politicians and commentators are desperate to maintain the illusion that there are big savings to be made by cutting payments to claimants who are unpopular with the public when the great bulk of spending is going where the public seems to want it to go.

And that simple, inconvenient truth explains why the burden of coalition welfare reforms is falling so heavily on the disabled and on people in work as well as on the out-of-work claimants for whom the public, the politicians and most of the commentators show so little sympathy.