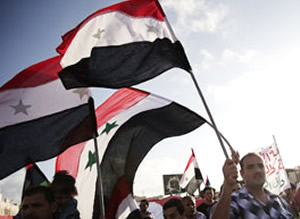 I’m neither a liberal interventionist, nor a non-interventionist. But Syria poses a very real dilemma because – no doubt about it – Bashar Al-Assad is a brutal dictator, just as his father was.

The dilemma is that there is no simple way to intervene and stop the killing.

Because we’re always tempted by simplifications which produce good guys and bad guys, the temptation is to blame Russia and China for not stopping the thousands of civilian deaths which Bashar’s army has caused.

According to the tabloid press, Russia is only interested in supplying arms, and China just wants to oppose us.

The problem with this little story is that the West remained oddly silent when Israel went into Gaza and killed 1500 in January 2009, and of course the West continues to arm tin-pot dictators in other parts of the world.

The other inconvenient truth is that Bashir’s regime is based on the internal support of the Alawite Shia. That means it is often mainly (though not exclusively) Sunni civilians who are killed – whether in Homs, Damascus or elsewhere.

Some readers may recall that when the Sunni of Hama rebelled against Bashar’s father in 1982, the city was razed to the ground and at least 10,000 civilians were killed.

Since Iran is mainly Shia (as is now Iraq), both those countries support Syria. Iraq has a long common border with it (as does the Lebanon), ruling out any effective embargo. Nor is a ‘no fly zone’ very useful – even assuming the UN were to back it – since there is no ‘liberated east’ as there was in Libya.

In truth, as Jonathan Steele pointed out in an illuminating piece some weeks ago, the conflict in Syria is not a simple fight between Sunni and Shia, and that Bashar’s supporters within the country are numerous.

Indeed, he reports a (largely ignored) YouGov poll finding 55% of Syrians want Bashar to stay. Since only 12% of Syrians are Alawite, this suggests non-negligible support amongst the Sunni ‘enemy’.

In these circumstances, the only thing one can rationally back is talks between the government and the opposition. The chances of successful talks taking place may be extremely remote, but sanctions are likely to strengthen Bashar’s hand (as happened in Iraq under Saddam).

Direct military intervention is neither desirable nor possible. In sum, there’s no simple solution.

• World outside Westminster: “If you do not help us, we will be killed” – Chris Tarquini, February 12th 2012

• As order breaks down in Syria, its Christians suffer the consequences – Ed Jacobs, February 7th 2012

• Amidst the burning flesh of Homs, Syrians plead: “We are getting slaughtered, save us” – Shamik Das, February 7th 2012

14 Responses to “Syria: There is no simple solution”