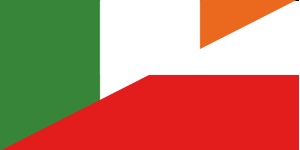 An Irish newspaper has been caught out blatantly smearing a pair of Polish migrants to the country.

The Irish Independent published an article purporting to quote an interview the couple, Magda and Robert, gave to the Polish Gazeta paper, but a comparison with the original reveals that the quotes were, at best incompetently and at worst maliciously, butchered in translation.

The Independent reports that:

‘Magda’ (36), not her real name, described her life on the dole in Donegal as a ‘Hawaiian massage’…

[Robert] in turn bragged about the county’s wonderful golf courses.

In fact, as a commenter on the social news site Reddit picked up, the original report suggests a different story. Rather than describing her life as a Hawaiian massage, Magda is actually doing a course in massage therapy, developing a skill which she is exchanging for services [all quotes via Google translate]:

Now I have an appointment with a carpenter, that I will make a bookshelf, and I will massage his back, because the boy has problems with the spine.

Rather than simply calling the town she lives in a “s***hole”, she says:

Donegal, a county on the northern tip of Ireland, for some the most beautiful place in the world, but for others – the biggest shithole. Wherever you look carefully, green hills and beaches to the horizon, like a postcard.

On the other hand you can go to the beach for an hour and meet one old woman in [a macintosh].

Day start is always the same: go to the beach to see the sunrise. It charges me for the rest of the day. Once, I slept until noon, now pity that life.

And as for golf, it is mentioned twice in the piece. Once by the author, and once by Magda herself:

On weekends, the middle class come here to play golf, and it attracts tourists in summer.

Little wonder that the Polish ambassador to Ireland has written to the paper, saying:

The danger of an anti-immigrant atmosphere developing during harsh economic times is well-documented throughout history. I would hope that a major newspaper such as the Irish Independent would be conscious of this and take great care when fact-checking such a potentially inflammatory article.

26 Responses to ““She calls her town a ‘s***hole'”: Irish newspaper smears Polish migrants”