Alex Hern reports on the BBC Trust’s assessment of the validity of BBC 1Xtra’s censorship of the phrase “Free Palestine”. 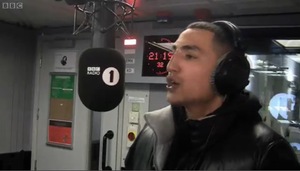 The BBC Trust has announced that it is satisfied with the decision to censor the word Palestine from a freestyle performance by the rapper Mic Righteous.

In the show, which aired 11 February last year, Righteous rapped:

“I still have the same beliefs

“I can scream Free Palestine,

“Die for my pride still pray for peace,

“Still burn a fed for the brutality

“They spread over the world.”

The production team made the decision to put a sound effect, of glass smashing, over the word Palestine. You can listen to the whole performance here, or the offending section here.

In response to the original complaints, the BBC executive argued (pdf)

that BBC Radio 1Xtra and the BBC as a whole had a duty to be impartial. In this instance, the production team felt that Mic Righteous was expressing a political viewpoint which, if it had been aired in isolation, would have compromised impartiality.

The BBC’s guidelines on impartiality state:

The audience expects artists, writers and entertainers to have scope for individual expression in drama, entertainment and culture. The BBC is committed to offering it.

Where this covers matters of public policy, political or industrial controversy, or other “controversial subjects”, services should normally aim to reflect a broad range of the available perspectives over time.

Interestingly, the BBC apparently considers “scream Free Palestine” to be more of a controversial statement than “burn a fed”. The Trust has now released its adjudication of the matter, but in so doing has dodged the question.

The Committee agreed that it is for the Executive to decide what to include and what not to include in a broadcast, provided the result does not lead to a breach of the BBC’s Editorial Guidelines.

The Committee agreed that its duty was to assess whether the material as broadcast was likely to have been in breach of the BBC’s Editorial Guidelines, in this case those relating to impartiality.

In other words, in response to complaints that the BBC was unfairly censoring an artist, the Trust has instead examined whether the finished program breached impartiality guidelines. Given the potential breach was never aired, the result of assessment was a foregone conclusion.

“The BBC Trust has moved the goalposts and decided to look at the censored content that was broadcast in February and April 2011.

“And the Trustees have decided that the content from which the word ‘Palestine’ had been edited was not biased against Palestine. This level of manipulation and duplicity would not be out of place in Catch 22.“

The BBC needs to answer the real question; not whether the finished show was impartial, but whether it is acceptable policy to censor the word Palestine.