Alex Hern looks at the eviction of Occupy London from St Paul's, and asks how much the church had to do with it. Are they really sad to see them go? 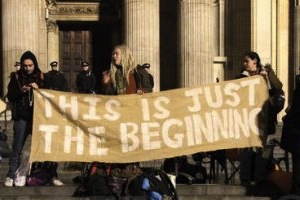 One hundred and thirty six days after they moved in, the protesters camped outside St Paul’s Cathedral were evicted, shortly before midnight last night.

Although not a surprise – it had been expected since the camp was refused leave to appeal against an eviction order last week – the speed with which the police assembled and began clearing the square caught many unawares.

The definitive account of the eviction will likely be James Ball and Ben Quinn’s at the Guardian.

They were there (almost) start to finish, and noticed an irregularity:

The sweep quickly stirred angry discussions among some at the protest, who quickly concluded authorities at St Paul’s must have allowed the police to clear the steps through an order of trespass.

Others believed they had seen the cathedral’s head of press in the early stages of the clearance, leading to allegations the cathedral was forewarned about the night’s activities.

The eviction order which had been contested was from the City of London Corporation, and had been granted on the grounds that the camp was blocking a public highway; the fact that the steps of St Paul’s were also evicted led many protestors to conclude that the church had colluded with the police.

Naomi Colvin, a spokeswoman for Occupy, told Ball and Quinn:

“I was shocked to see policemen on the balcony [of the Cathedral]. It seemed to be collusion. Tammy [another activist] just gave an interview saying how betrayed she felt when she learned the cathedral gave permission for us to be removed from its steps.

“That wasn’t covered in the high court orders – it’s like St Paul’s has learned nothing from the last four months.”

The statement from the church says that they:

“Regret the camp had to be removed by bailiffs.”

However, they still have not confirmed or denied whether they explicitly gave permission for eviction from their land.

Even the police seem confused on the matter, with one telling Jonathan Bartley, the director of Ekklesia, that:

“St Paul’s have given us permission under section 14 of the Public Order Act.”

But another focused on an alleged breach of the peace:

“You have seen what’s happening tonight, okay? It’s antagonising people, especially round here. We believe there is a breach fo the peace because of that and will be moving people off the steps.”

“I am profoundly shocked at being dragged from my knees as I prayed on the steps of a church. The Cathedral Chapter and the Bishop of London have urgent questions to answer.

“Did they know when the eviction was due? Did they give permission to clear the steps and, if so, when and why? What image of Christianity are they trying to send out?”

The church has been pushed into awkward situations several times throughout the occupation, and they may be hoping that, with the protestors gone, they can go back to charging £14.50 for entry – but the manner of the eviction will leave questions being asked for a while longer.

The church can not put this to bed yet.

13 Responses to “Occupy London evicted, but are St Paul’s sad to see them go?”