Natan Doron examines how, and why, we should reduce water use in Britain, and asks what the government is doing about it. 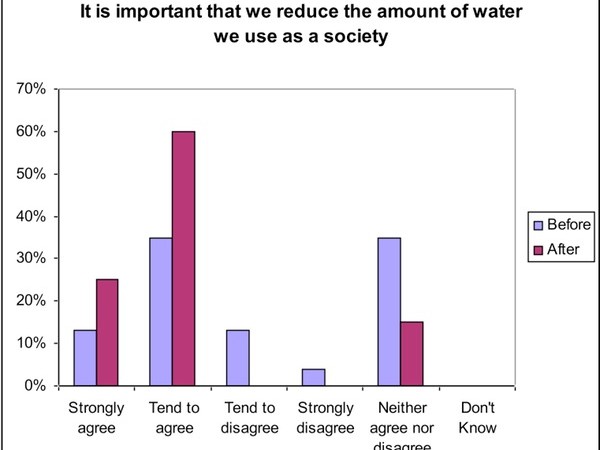 Natan Doron is a senior researcher for The Fabian Society

Understanding that a resource is scarce is a crucial part of building support for more responsible use of that resource. Despite the growing evidence of water scarcity in the UK, large sections of the public still do not think that there exists a limit on the amount of water that we can extract from the environment to supply our homes and businesses.

Research (pdf) undertaken by the Fabian Society last year as part of our environment and citizenship programme showed that when presented with information about the level of scarcity, people strongly recognised the importance of reducing the amount of water we use as a society.

As Chart 1 below shows, the shift in attitudes amongst a population of over 50 participants before and after discussing the issues in a deliberative focus group.

Water scarcity has at times been a difficult concept to communicate. Unfortunately, it is now becoming easier. Secretary of state for environment, food and rural affairs Caroline Spelman announced yesterday that ‘drought may be the new norm’ for water supplies in some parts of the UK, particularly in the South of England.

This claim is based on the evidence of two dry winters running, as well as evidence on climate change suggesting that the future looks set to increase the likelihood of drought conditions. Such evidence is not however, very new (pdf).

The Fabian Society last year pushed for the government to use the water white paper to take strong action on rolling out water metering so that everybody was charged for water by what they use. The water white paper itself made a host very good arguments for why metering is the best way of charging for water:

Metering can have advantages for customers and help tackle affordability. It is a fair way of charging for water because metered customers pay only for the water that they use. Metering also provides a direct incentive to reduce water usage. [Page 64, water white paper]

Despite this, the white paper states clearly that no action will be taken by government to take steps to introduce universal metering across the UK.

The arguments against metering are that it could have negative implications for those with large families and/or a low ability to pay. These arguments are important, and it is on them that the debate should now be at. But the lack of government ambition on water metering means that we are still making the basic case.

Paying for water by what we use presents a real potential to change the way we view this scarce resource. Our current charging structures are outdated and unfair, and the government is merely delaying the inevitable and important decision to take action on setting out a timeline for metering across the country.

• How hard is it for families to keep their heads above water? – James Plunkett, July 5th 2011

17 Responses to “Metering can reduce water use, so why is the government not backing it?”