Today’s Report on Jobs from the Recruitment and Employment Confederation suggests that the number of people getting jobs increased a little around the New Year. It’s too early to tell if this is a trend or a blip, but it does seem to be a real change.

Each month the REC and KPMG publish the results of a survey of recruitment agencies that asks whether they are seeing more permanent and temporary appointments than in the previous month. The index measures the level of change – over 50 means more than last month, under 50 means fewer.

This is welcome news and follows good Services Purchasing Managers’ Index results published last week, by Markit, the same organisation that carries out the research for the REC and KPMG.

This found that employment growth in services (over three quarters of the economy) was “the strongest since March 2008.”

Both are in line with last month’s Reed Job Index, which found a 9 per cent increase in new jobs from January 2011. These surveys aren’t all equally reliable, but taken together they do suggest a real improvement in the last month or so.

But it’s too early to start celebrating. Firstly, as the REC says, what we have here is a “modest increase” in permanent appointments and there was an even stronger improvement last year, which turned out to be a blip, rather than a trend: 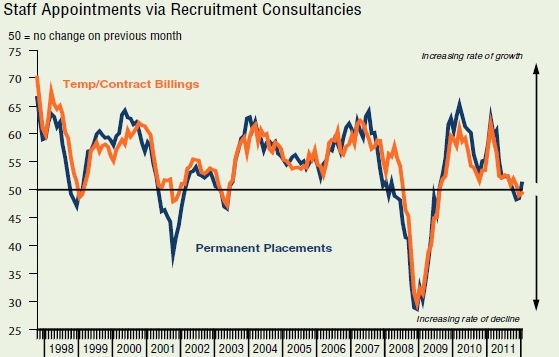 These are figures for appointments; the Report on Jobs also produces an index for employers’ demand for staff, based on vacancies.

I pay more attention to the appointments figures (actually appointing someone is the best test of demand) but you need to take this index into account to get a full picture.

In this index, demand didn’t actually stop increasing, but the rate at which it has been growing has slowed for three months running and is now at its lowest for over two years:

Positive news is scarce right now and most of today’s headlines emphasise the increase in placements. Fair enough, but expect the DWP to repeat its usual line that “there are jobs out there” and that unemployment can be blamed on the attitudes of unemployed people. Today’s report actually provides further evidence that this is wrong.

The REC also produces an index for the availability of permanent and temporary job candidates. Now it is true that this is rising at a slower rate than in previous months, but it clearly shows that the supply of people who want jobs is still growing – indeed, the availability indexes are more clearly in positive territory than the vacancy and placement indexes:

“Sadly, though, the number of people hoping to fill these vacancies continues to rise and with unemployment benefit claimants up for the tenth month in succession, the competition to be the right candidate in the right place is tougher than ever.”

The working age population is on an upward trend (over the past forty years it has risen every year except 1993) and for decades governments have been trying to increase the workforce by moving people from disability and other “inactive” benefits to Jobseeker’s Allowance. This means that job growth has to be quite strong just to stop unemployment from going up – we aren’t at that level yet, let alone at the point where we can expect to see it coming down. With 94 per cent of public sector cuts still to come, the clever money is still betting that the number of unemployed people is going to rise this year.

• Unemployment: How Cameron and Clegg are letting the next generation down –Rachel Reeves MP and Stephen Timms MP, December 14th 2011