With the €130bn Greek bailout package finally approved by the troika, markets appear to be rallying - but it’s far from certain the country is saved. 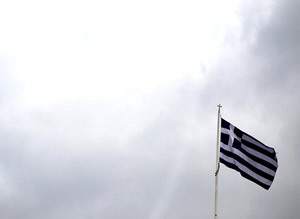 George Irvin is Professorial Fellow at the University of London, SOAS, and a member of the Research on Money and Finance group

With the €130bn Greek bailout package finally approved by the troika, markets appear to be rallying. But it’s far from certain the country is saved.

For one thing, the package still has to be approved by sceptical parliaments in the Netherlands, Finland and Germany. Several big hedge funds that hold Greek bonds have yet to accept the debt write-down; unless they do, Credit Default Swaps (insurance) will be triggered, sinking the entire deal.

To meet the target of a debt-to-GDP ratio of only 120 per cent by 2020, the economy, which is now shrinking at 5 per cent yearly, would need to stabilise next year and grow at 2 per cent annually for six years running.

Few believe this is possible – even the IMF says it’s unlikely the target can be met.

Let’s be clear: the ‘bailout’ is not really a bailout of Greece, but rather of the mainly German and French banks. Why? Over the past decade, Germany kept domestic wages flat, helping it to run a massive trade surplus with Greece and other peripheral eurozone (EZ) countries.

These surpluses have been recycled by German and other banks lending to the periphery (pdf1 and pdf2), much in the same way as the 1973/79 oil surpluses were recycled largely through London in the form of highly profitable loans to Latin America.

Just as Latin America suffered a debt crisis in the 1980s – and IMF-imposed austerity designed to repay the debt led to riots and made matters worse – so we are witnessing the same thing in the eurozone.

Nowhere more than Greece has troika-imposed austerity brought such pain, the country’s GDP having fallen by 15 per cent since early 2009 while nearly half of all young Greeks are now unemployed and, nationally, unemployment is more than 20 per cent.

At this stage, the dilemma is that the cost to Greece of defaulting may be even higher than that of adhering to troika-imposed austerity. Ironically, this need not have been the case had the ECB acted decisively at the outset of the crisis.

The internal political consequences of a Greek default are particularly worrying. The general election in April will almost certainly show the mainstream political parties, New Democracy and PASOK, to be thoroughly discredited.

The smaller parties of left and right have pledged to leave the euro. The introduction of a new drachma (ND) would very quickly result in serious inflation.

The implication is clear: without a stable government, Greece’s departure from the euro – and possibly even its remaining within the euro – will be accompanied by growing political chaos, and chaos will bring military intervention to ‘restore order’. The Greek army is strong; military spending in Greece is proportionately twice as high as other European countries.

Those old enough to remember the colonel’s coup of 1967 will remember that the West turned a blind eye to the repression which followed; thousands were tortured or killed and both the communist and social democratic parties were illegal for more than a generation.

History may be about to repeat itself.

The effects of austerity will be one of many topics covered at this weekend’s Fabian Society conference “Social Europe: Worth Fighting For?” – the last few tickets are still available for this event, please click here.

21 Responses to “Greece’s Armageddon: Could the military seize power to ‘restore order’?”