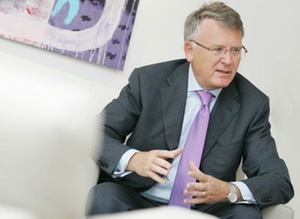 With the tide of conservatism that’s sweeping across Europe uniquely ill-suited to solving the unemployment crisis, it falls to the Party of European Socialists to present a reality-based approach, rather than arguing for ‘expansionary fiscal contraction’ and crippling austerity.

The PES held a meeting of all their members employment and social ministers, to develop a plan to present to the meeting of EU employment ministers today.

“While conservatives only talk about the issue, we have a concrete proposal. We need 10 billion euros to be ring-fenced in the EU structural funds so that we can start lifting 5.5 million young people out of unemployment.

“That is why we as socialist and social democrat ministers, will be pushing for an amendment to include a European youth guarantee”.

This plan follows the news that the UK is second only to Italy in the cost to the economy of young people not in education, employment or training (NEETs):

Annually, the cost to the British economy of youth unemployment is €16.363 billion, just under one per cent of our GDP. To put that in context, the UK has had a total of 0.3 per cent GDP growth in the last six quarters.

Discussing how to deal with the problem, the Eurofound report commends the flexible new deal, scrapped by the coalition in Summer 2011, saying:

In most EU countries, a combined and coordinated approach – including provision of information, career advice and guidance, mentoring, job-search assistance and job-matching services – seems to be the most useful set of measures for smoothing school-towork transitions.

In the UK, for example, the flexible new deal programme offers young people on social benefits a customised approach involving personal advice and counselling, development of an action plan and work experience.

In most EU countries, a combined and coordinated approach – including provision of information, career advice and guidance, mentoring, job-search assistance and job-matching services – seems to be the most useful set of measures for smoothing school-towork transitions.

The replacement for the flexible new deal in the UK, the coalition’s work program, has not had quite the same positive response.

14 Responses to “European Socialists call for more than talk on youth unemployment – will the blue bloc listen?”