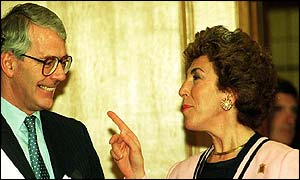 Edwina Currie has returned, triumphantly, to what she does best: attacking people living in poverty for having the temerity to do things like watch TV, smoke cigarettes, or own pets.

In an phone-in show on Radio 5, Currie spoke with Hayley, a mother from Derbyshire, who’d been explaining that her and her husband sometimes have to skip meals to feed their children.

The first thing Currie said in the discussion was to quiz Hayley on her lifestyle, asking:

“Have you by any chance got any animals? Dogs or anything like that? … Do you feed the dog everyday? … How many animals and pets have you got in the house? … Have you got Satellite TV? … Have you got clubs, are you paying through catalogues for clothes? … So where’s all the money going, Hayley?”

Currie’s implication is that answering yes to any of these questions – having a pet, buying clothes through mail order, paying the equivalent of two cinema tickets a month for TV – renders one ineligible for sympathy. And her incredulity at the difficulty of Hayley’s life despite not committing these ‘sins’ belies her ignorance at life below the poverty line in the UK.

When Currie hears something she thinks she can blame Hayley for, she jumps to conclusions almost instantly.

One of the expenditures mentioned is paying off bills. Currie hears this, and goes for the throat, declaring:

“What’s happened here… is that when the money was coming in – this sounds like there were two salaries coming in and no savings – life was being lived to the full and a very good life indeed.

“But when that’s no longer the case, when there’s no longer money coming in, then  you have to evaluate whether you’re going to be able to get back to the good life quickly or not in which case you’re going to have to think about maybe declaring yourselves bankrupt.”

Which causes Hayley to tearfully respond:

You can listen to the discussion, and Edwina’s shocking heartlessness, below:

Currie simply can’t believe that people who have hard lives aren’t personally to blame. It’s the point she made in November, when she said:

And it’s the point she’s making now. She is a walking embodiment of the just-world fallacy, she appears to be impervious to reason or evidence, and she makes people cry on the radio.

• Look Left – Tories past and present battle to out-nasty each other – Shamik Das, November 20th 2011

37 Responses to “Edwina Currie is good at making people cry”