Alex Hern reports on the news the credit rating agencies would be unlikely to give an independent Scotland a triple-A rating. 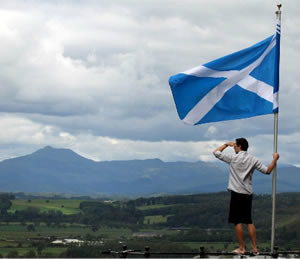 The three major credit ratings agencies have told the Financial Times that an independent Scotland would not be able to count on receiving a triple-A status, echoing doubts raised last month, but adding fuel to concerns that the agencies have too much unaccountable power.

Scotland could expect to receive an investment grade rating, but some notches below triple A, one agency told the FT privately.

The agencies declined to comment publicly on the precise ratings Scotland could achieve because they do not undertake unsolicited ratings and the Scottish government has not yet sought a draft opinion.

Last month, Martin Wolf wrote for the paper that:

A newly independent small country with sizeable fiscal deficits, high public debt and reliance on a declining resource for 12 per cent of its fiscal revenue, could not enjoy a triple A rating.

The ratings agencies seem to be aware of the impropriety of commenting on such a hot-button political issue, however.

As the FT’s Alphaville blog points out, their excuse that “they do not undertake unsolicited ratings” doesn’t hold true:

[Unsolicited ratings] would be the way they are solicited for Italy, France… actually, the entire eurozone… the US and presumably most other sovereigns?

They have good reason to be so coy, however, with the Party of European Socialists being just the latest group to call for much tighter regulation to ensure that “democratic standards” of society are maintained.

The president of the Party of European Socialists, Sergei Stanishev, of the Bulgarian Socialist Party, said:

A dozen anonymous analysists with no shred of legitimacy and a proven track record of gross inefficiency, effectively decided on Friday to make life much harder for millions of Europeans… This is an international scam that has to stop.

Either we accept the domination of CRAs and we continue to weaken our societies, or we rebuild democratic standards in our society.

The debate around Scottish independence needs to be held with every party being in full possession of the facts – but if the ratings agencies step in, they risk sounding less like they’re giving advice and more like they’re making threats. They seem to understand this fact, but all sides in the debate should be wary of making political capital out of unaccountable power.

• Salmond has questions to answer, because the evidence doesn’t support him – William Bain MP, January 24th 2012

17 Responses to “Credit rating agencies weigh in on independent Scotland”