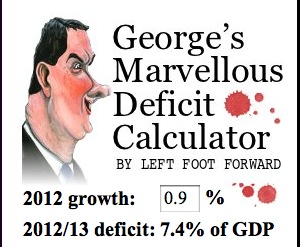 The Confederation of British Industry (CBI) has today announced it is cutting, for the fifth time, its growth predictions for 2012, down to just 0.9 per cent growth over the whole year. In November it was predicting 1.2 per cent.

However, with modest growth of 0.2 per cent predicted for the first three months of this year, Britain was expected to escape an official recession – defined as two consecutive quarters of decline. Growth fell 0.2 per cent in the last quarter of 2011.

“After a particularly difficult autumn which saw a contraction in growth in the fourth quarter, recent business survey data in manufacturing and professional services, has been more encouraging with an uptick in activity and improved business sentiment.“

The optimism has not always paid off, however. In September 2010, the group were predicting a total growth for 2011 of two per cent – and that was after a downgrade from 2.5 per cent. The final tally for the year was just 0.3 per cent.

With that in mind, the difference of ‘just’ one per cent between the CBI’s prediction and that of NIESR, who expect a contraction of 0.1 per cent as we reported on Thursday, is quite small.

If we put the CBI figures into George’s Marvelous Deficit Calculator, over there on the sidebar, then we find a predicted deficit of 7.4 per cent over the course of 2012 – still almost two per cent higher than that predicted by the OBR in June 2010, but well within the realm acceptability for the chancellor in this age of lowered expectations.

He’ll be hoping that the CBI has made an accurate prediction – but if he’s a realist, he’ll expect something quite a bit lower.