Will Straw writes on Vince Cable's attempt to reclaim the comparative advantage of British industry. 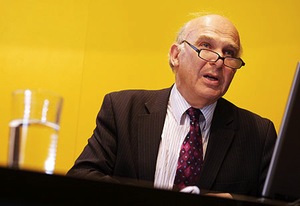 According to the Financial Times (£), business secretary Vince Cable has written to both David Cameron and Nick Clegg calling for a more strategic approach to industrial policy. The letter says:

“There is something important missing: a compelling vision of where the country is heading beyond sorting out the fiscal mess; a clear and confident message about how we will earn our living in future…

“We can’t predict the economic cycles and market-driven competitive forces of the future. But we can think a decade or two ahead.”

The FT article outlines that the Business Secretary:

“Is not interested in picking winners or propping up failing companies, but he argues the government should support industrial sectors if they are threatened by commercial decisions by big multinational companies”.

Cable has looked out countries such as Germany, South Korea, Japan and Singapore for models of a modern industrial policy.

The approach mirrors that taken by IPPR in our recent report, ‘The Third Wave of Globalisation‘ which looks at how Britain can make a living in the global economy.

The report includes the chart below which maps a selection of sectors on a matrix showing the extent of Britain’s comparative advantage against expected global demand, each measured on a scale from 1 (low) to 5 (high). Drawing on evidence from a number of academic and industry sources, it highlights some of the opportunities currently available to the UK. 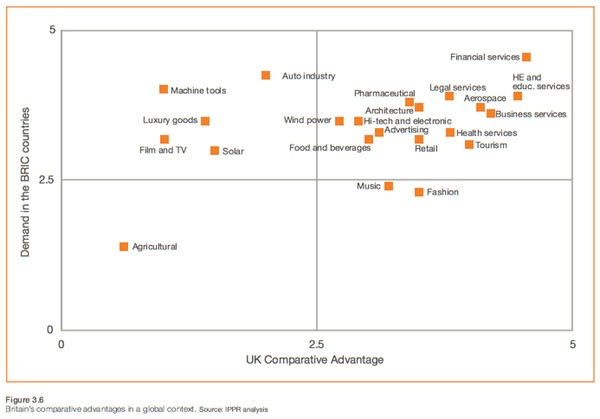 IPPR’s report calls for the government to develop a:

These would include many of the sectors in the top right hand corner of the chart such as financial and business services, pharmaceuticals, aerospace, education and health services, green technology (especially wind power), hi-tech and electronic industries, and tourism.

Not all of these sectors will need government support.

But in some, the government may find market failures such as an inability to access credit, market concentration by one or a few companies, or poor provision of infrastructure.

There may also be government failures where reform is needed, such as unnecessary or outdated regulations, poor procurement rules, or incentives that are keeping people away from work. In some cases, government and business may both have to do better such as the provision of a skilled workforce which is properly utilised by firms.

Government has many more levers to push and pull than it often realises, but taking a sectoral approach is critical to get Britain growing again.

15 Responses to “Cable calls for return of industrial policy”