Cormac Hollingsworth shows how social housing could be the best way to save money on housing benefit: Three times as effective as a cap. 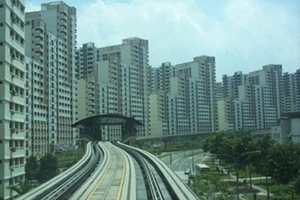 Housing investment is an important part of our economy, yet the coalition has lacked the imagination to apply the principles of industrial policy and active government to the problem of a high housing benefit bill.

For example, why aren’t we looking at Singapore’s housing policy? There, land is at such a premium that the government builds low-cost housing that is managed by housing co-ops.

Perhaps Singapore sees its housing investment as part of its industrial policy: housing costs are a major determinant of wage levels so a low cost housing strategy would make a major contribution to improved productivity.

Assuming that each unit costs £100,000 of investment to build, and that the cost of land is gifted from the local authority, we simply need to know how investment in housing increases economic growth.

The Office of Budget Responsibility states that the output multiplier of investment is one-for-one: for every £1 of housing investment it boosts the economy’s output by £1. This boost in economic output then feeds through into an increase in tax receipts: we’ve calculated that in our present stagnating economy, a £1 increase in output increases receipts by 65 pence.

Therefore, while the government spends £100,000 it receives an extra £65,000 in tax receipts, so netting these two out, the cost to the government of building these units would be £35,000.

This might give us pause: across the 67,000 families on whom the benefit cap falls, this would represent a bill of £2.3 billion. But that would be to neglect that the social rent savings in the future. Putting people into low cost socially rented represents an enormous fall in housing benefit.

The housing benefit cap is £400 per week but social rents are much lower, perhaps as much as £300 per week lower. So putting families into government built low cost housing would save an additional £15,600 per year. This would cover the per-unit cost of building of £35,000 after two and a quarter years.

After that, the government continues to save £15,600 per year per family on housing benefit payments. Scaling this up over ten years and across the 67,000 families, the build strategy would save the exchequer a further £8.1 billion.

This is an enormous saving, three times more that the £2.75 billion the government plans to save. It is also additional to that saving: The money saved from the housing benefit cap is not lost by putting people into social housing.

These huge savings are before we take into account the broader economic productivity benefit of solving high-cost-housing problem, but it’s clear why Singapore builds low cost co-operative housing to tackle its high cost of land problem. It should now be obvious that it’s applicable here.

Until we realise how an active government’s industrial policy compels us to provide low-cost housing, our economy will continue to stagnate, while Singapore’s continues to grow.