Will Straw details the news that Britain is the 'sick man' of the G7, and asks why that is. 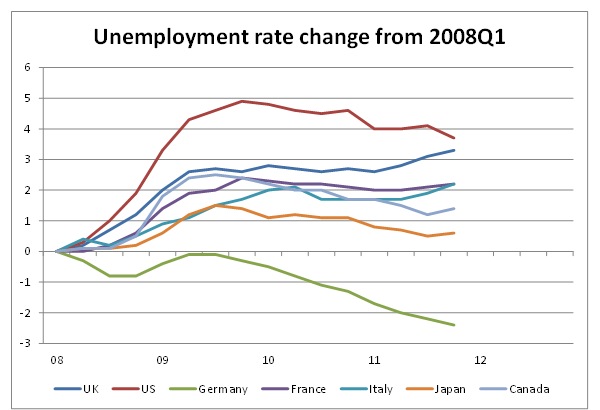 The print edition of today’s Daily Mirror includes an article headlined ‘Tory-led Britain is “sick man of G7”’. The article is based on new IPPR research showing how badly Britain is faring against its major competitors on jobs and growth.

Graph 1 shows Britain’s jobs record since the start of the recession will soon be the worst in the G7. Britain’s unemployment rate has risen 3.3 per cent since the recession started – higher than any country bar the United States.

But the US has been gaining jobs in recent months while the UK continues to lose them. Germany, by contrast, has reduced its unemployment rate by 2.4 per cent since the recession started.

Graph 2, meanwhile, shows only tsunami-hit Japan and Eurozone-afflicted Italy have recovered as poorly as the UK.

Canada, Germany and the US have all recovered all the lost output from the recession and are now larger economies than they were at the start of 2008. France, meanwhile, will soon have recovered all its lost output. But the UK economy, which shrank 7 per cent at its lowest point, is still 3.8 per cent smaller than it was in early 2008.

The crisis economies of Japan, which is 4 per cent smaller than its previous peak, and Italy (5.2 per cent lower) are the only countries with a worse story. 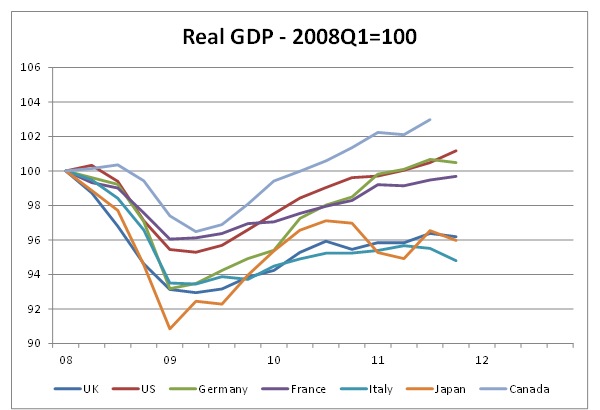 Figures released today confirm that the Eurozone crisis is not to blame for the UK’s stagnant economy. These new figures comparing Britain’s record with its G7 partners show that a different path – one taken in both North America and Europe – was possible.