Barack Obama can start laughing all the way to the White House right... about... now. 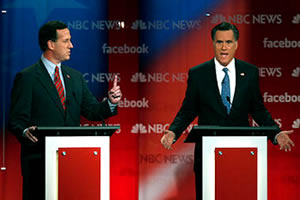 Gary Younge has a very good column in the Guardian examining Barack Obama’s history of luck in elections. He rightly concludes that the president should be fighting for his life, but may instead be able to walk this election.

Unsealed divorce papers revealed that [his main opponent in the Democratic primary] Blair Hull’s former wife had detailed several allegations of verbal and physical abuse. His ex asked for a restraining order because Hull had threatened to kill her.

Republican candidate Jack Ryan…it was alleged, had pressured his ex, Jeri, to go to clubs where people had sex in public…

Denying the allegations, Ryan nevertheless dropped out, in June. Five months before the election Obama had no opponent.

Hillary Clinton’s 2008 campaign was far less than the sum of its parts; John McCain chose Sarah Palin as his running mate, a hail mary pass that went seriously awry.

And he’s getting luckier every day:

Next week in Michigan could mark the point at which the Republican hierarchy has to seriously consider an alternative storyline because the base has lost the plot, the sub-plot, the chapter headings and jettisoned the main characters.

Michigan is not just a state Romney should win. It’s a state he has no business losing. It’s the state where he was born. His father was governor there. He won it last time. He is outspending Rick Santorum there by three to one. It shouldn’t even be close.

Yet for the past couple weeks he has been trailing Rick Santorum in every poll there (although the race has started to tighten).

As Tom Rouse wrote at the weekend, however, Obama is not yet laughing all the way back to the White House:

[A] more aggressive strategy and the slow, but steady growth in the economy have led Nate Silver to conclude that Obama’s chances of re-election are now far greater than they were in November.

Despite these improvements, he cautions that it is premature to expect an Obama victory, given the diversity of the Republican field, it is impossible to tell what strategy Obama will have to pursue and what attacks he is likely to be subjected too.

This has been accompanied by a small rise in his approval ratings, with the latest Gallup polling placing him at 47 per cent approval; equally significantly, a growing number of Americans arebeginning to have faith that the economy has turned the corner, and this is being reflected by a renewed faith in the Obama administration.

More significantly his stock is rising when voters are asked to compare him to his potential Republican rivals. He has comfortable leads over both Mitt Romney and Rick Santorum when they are compared head-to-head and these leads are likely to increase if the Republican race gets any messier.

Even Rick Santorum, however, has quite some way to go before he is as terrible an opponent as Sarah Palin.

The Telegraph reports today that… well:

Sarah Palin believed that the Queen rather than the prime minister was responsible for the decision to keep British forces in Iraq, according to research done for a new film chronicling her brief political rise…

Her confusion emerged during a coaching session with Steve Schmidt, a top McCain adviser, who asked Mrs Palin what she would do if Britain began to waver in its commitment to the Iraq war.

In one of the many rambling responses that steadily eroded her credibility during the campaign, Mrs Palin reportedly replied that she would “continue to have an open dialogue” with the Queen.

A horrified Mr Schmidt informed her that that the prime minister, then Gordon Brown, would be responsible for the decision.

8 Responses to “Obama’s playing against a weak field, but it’ll never be as bad as last time”