Ed Jacobs looks at life for Christians in Syria during the unrest, and calls on the government to do more to support freedom of religion worldwide 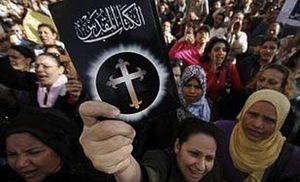 Left Foot Forward’s Ed Jacobs is a member of the Christian Socialist Movement and City Evangelical Church in Leeds and writes in a personal capacity.

As Russia’s foreign minister Sergey Lavrov today meets with President Bashar al-Assad in Damascas, the estimated 2.5 million Christians in Syria live in fear, stuck between a rock and a hard place.

As the news of Syrians being slaughtered continues at a relentless pace, it is thought that over one hundred Christians have now been targeted, either killed or kidnapped in brutal ways. Reporting last month, the organisation Barnabas Fund which campaigns on behalf of persecuted Christians has explained:

The Christian community in Syria has been hit by a series of kidnappings and brutal murders; one hundred Christians have now been killed since the anti-government unrest began.

A reliable source in the country, who cannot be identified for their own safety, told Barnabas Fund that children were being especially targeted by the kidnappers, who, if they do not receive the ransom demanded, kill the victim.

And the source provided detailed information – some of which cannot be made public for security reasons – about incidents that have taken place since Christmas.

Two Christian men, one aged 28, the other a 37-year-old father with a pregnant wife, were kidnapped by the rebels in separate incidents and later found dead; the first was found hanged with numerous injuries, the second was cut into pieces and thrown in a river. Four more have been abducted, and their captors are threatening to kill them too.

On 15 January two Christians were killed as they waited for bread at a bakery. Another Christian, aged 40 with two young children, was shot dead by three armed attackers while he was driving a vehicle.”

Perhaps because of such brutality, however clear things might seem, Christians in Syria remain wary of what “change” might mean for their country, looking to Iraq where their brothers and sisters in Christ are now making a mass exodus as a result of the attacks they have faced and Egypt where the prospect of an Islamist government has been matched by on-going attacks on Christians in a way not previously seen under President Hosni Mubarak.

Aware of this, President Assad is now using a policy of fear to court favour among Syria’s Christian communities. In an article published recently in “The Australian”, Richard Beeston explained:

When Father Basilious Nasser got an urgent call to say that one of his parishioners had been shot and needed help, the priest went immediately. As he tried to rescue the man on a street in the city of Hama, the cleric was shot twice by a sniper and died.

It is still unclear whether he was killed by government forces or the opposition, but his death nine days ago has shocked the Christian community.

For centuries, the ancient eastern churches have thrived on their ability to avoid becoming embroiled in the region’s volatile politics. But increasingly, the 2.5 million Christians in Syria fear being dragged into the violence.

There is no end in sight to the bloodshed, and hopes for a foreign-mediated solution dimmed yesterday as UN Security Council members failed to reach agreement yet again on a resolution to end the violence.

The fateful moment for Syria’s Christians can be traced back 10 months ago, when President Bashar al-Assad summoned leaders of the community to his palace and gave them an ultimatum: support me, or your people will suffer.

Perhaps mindful of the plight of the Christians in Iraq and Egypt, who have come under attack since the removal of secular dictatorships over the past decade, the leaders agreed.

As the West continues to look in anticipation at the opportunities that the Arab Spring could present, in Egypt and Iraq to name just two countries, the long lost promise of democratic futures, based on freedoms allowing Christians to pursue their faith free from intimidation, has so far failed to materialise.

Having actively called for President Mubarak to go in Egypt, intervened in Libya and spent years in Iraq we have a responsibility now to use all the muscle and leverage we have secure such freedoms. It is only then that Christians in Syria will truly have the confidence to escape the grip of fear with which President Assad now holds them.

And that goes for our “friends,” for want of a better word, too.

When Saudi Arabia for example finds itself third on the list of countries that persecute Christians, with reports before Christmas of 42 Christians in the country being arrested and tortured, why then did David Cameron’s recent visit to Saudi include a delegation of arms deals?

How perverse that we sell arms to a government that then subsequently used them to persecute Christians among others. Likewise, whilst Afghanistan, a country we supposedly “liberated” from the Taliban is second on the watch list of countries persecuting Christians, coming behind only North Korea, what message does it send when we sign a long-term partnership agreement with them?

In an e-petition I’ve recently established I call for the government to take action on three fronts:

1. To hold a full debate on the floor of the House of Commons on the issue of the persecution of Christians worldwide, mirroring similar debates in the Lords to enable our elected representatives to express their views.

2. That the government should be prepared to use sanctions, such as those related to trade where supposedly “friendly” countries fail to protect Christians from persecution or worse still, perpetrate such acts themselves.

3. To establish a new, annual report on the state of religious freedoms worldwide to highlight and expose those countries that fail to uphold the basic right to allow freedom of religion, free from intimidation.

In his speech marking the 400th anniversary of the King James Bible, David Cameron spoke of the UK as a “Christian country” before declaring that should “actively stand up and defend” the values and morals from it that have shaped the UK. It’s time to stand up and stand up clearly for those very same values and moral worldwide as well.

As we look at the hideous position Syria’s Christians now find themselves in, let us remember the words of Martin Luther King:

“In the end, we will remember not the words of our enemies but the silence of our friends.”

21 Responses to “As order breaks down in Syria, its Christians suffer the consequences”