Chris Tarquini rounds up this weeks biggest stories from the other 192 nations in the world. 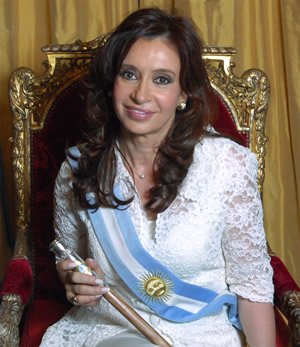 We begin in South America, with news the Argentine Senate is set to meet to discuss the future of the Falkland Islands amid renewed international pressure from Cristina Kirchner’s government to hold talks over the lands they call ‘Las Malvinas’.

Kirchner has recently responded to David Cameron’s ‘colonial’ accusations levelled at Argentina and this seems to be the newest way to increase pressure on Britain.

While diplomatic isolation through Latin American solidarity against British shipping and other areas seems to be the favoured approach of the Kirchner government at the moment, whether the senate meeting creates further Argentinian anger concerning the disputed islands remains to be seen.

Staying in the southern hemisphere, and there was further evidence that outside of our shores this week there has been a prime example that angry demonstrations are not just a British phenomenon.

Australian PM Julia Gillard and Leader of the Opposition Tony Abbott both had to be rescued in Canberra after protestors surrounded the lobby they were situated in after Abbott had reportedly suggested closing the city’s Aboriginal Tent Embassy.

The Embassy was established in 1972 as a result of the then prime minister of Australia’s failure to recognise the land rights of the indigenous people.

Around 200 protestors forced the emergency evacuation of the PM and opposition leader as one of the embassy’s founders accused Abbott of inciting the protest. Despite being an in-tents experience for Gillard both her and Abbott were unhurt.

Iranian President Mahmoud Ahmadinejad has insisted his government are ready to re-enter talks with the west concerning its nuclear programme whilst claiming tougher sanctions and coercion would not force the nation to abandon its controversial plans.

Whilst he has been short on specifics it is a welcome step in the right direction as certain American political candidates find themselves talking tough on the Islamic state as election season draws near.

Despite Iran claiming the nuclear programme is completely peaceful the UN watchdog the International Atomic Energy Agency has raised concerns Iran has carried out tests relevant to the development of a nuclear explosive device.

As per usual the volatile talent show that constitutes the Republican Party presidential nomination battle is dominating the headlines across the pond as only four men are now left standing in the fierce competition to take on President Obama in 2012’s general election.

Gingrich is now positioning himself as the only alternative to the ‘establishment candidate’ Romney and angry rhetoric which generally involves attacking the press seems to be gaining him traction amongst the GOP faithful.

His recent debate performance in which he responded to a question about his past infidelities and alleged ‘open marriage’ requests with an all out verbal assault on the questioner seemed to have been the rhetorical flourish that pushed him to the front of the pack.

Florida is a closed primary so only Republican party members (not independents) can vote and recent polls show the race to close to call, although Romney’s advantage in early voters may push him over the finish line.

One thing is for sure, as President Obama watches the articulate and charismatic serial adulterer Gingrich and the Presidential looking yet somewhat dull Romney tear each other part he’ll certainly be thanking his lucky stars.

With a 44-49 per cent job approval-disapproval rating, Obama may soon be realising that the candidate of hope and change is gone and this one may be a slug-fest all the way to the bottom.

Whether the eventual GOP nominee can overcome their numerous flaws and taken on a politically vulnerable Obama seems unlikely, however one thing to remember:

• Sign up to our new weekly email on the US 2012 and the latest news from around the world, The World Outside Westminster

• Obama puts manufacturing top of the agenda – time for Cameron to do the same? – Tony Burke

• Bill Gates: Innovation is the key to overcoming the need for aid – Mann Virdee

9 Responses to “The World Outside Westminster – Falklands, nukes, protests and Gingrich”