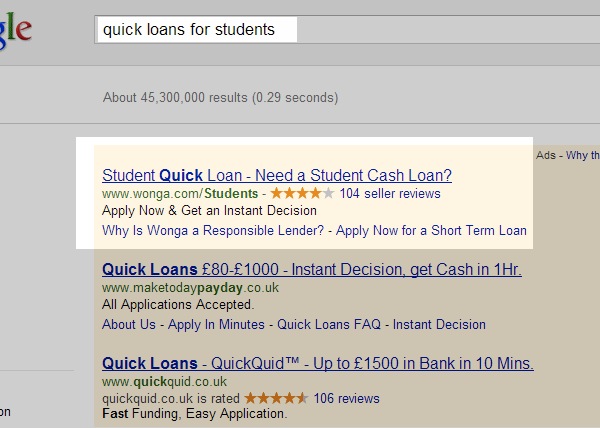 Following our revelation that payday loan company Wonga was targeting students for its 4000 per cent APR loans, they have taken down the page that we highlighted.

In its place is a message from the company in which they claim:

We have removed the previous material on this page, which was about student finances, the risks of unauthorised overdraft charges and the differences between long and short term loans. We took it down because we do not actively target students as potential customers and we wanted to clear up any confusion about that.

We listen to our customers and public opinion, so it was clear the old article here gave rise to misunderstandings. We would like to clarify that Wonga does not target students.

This is a climbdown for Wonga, which would not have happened were it not for the outrage expressed at their targeting of payday loans at those who don’t even have a payday.

However, as Tim Ireland at Bloggerheads has uncovered, their actions don’t match up to their claims:

Wonga.com are still actively bidding for queries relating to students and student loans in AdWords. This is completely distinct from their SEO efforts/excuses, and it is not something that happens by accident.

Wonga.com are actively pursuing students and trying to flog them loans at a typical APR of up to 4214 per cent while claiming that they never intended to do any such thing:

This is not the only evidence; Ireland has much more on his site. Wonga have accepted that targeting students is beyond the pale, but they’re still trying to get away with it below the radar.

They have a lot of questions left to answer about the extent to which they prey on vulnerable groups, but the first thing they need to do is come completely clean about the fact that that is indeed what they have been doing to date.