Ed Jacobs rounds up the week’s news from Scotland, Wales and Northern Ireland in The Week Outside Westminster. 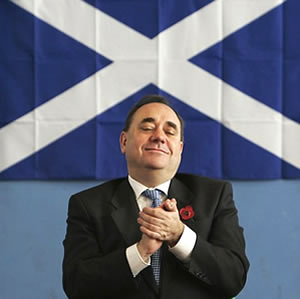 To receive The Week Outside Westminster in your inbox, sign up to the email service

There was only one story in town across Scotland this week.

Having used his New Year interview on the Andrew Marr Programme to call for a referendum on Scottish independence sooner rather than later, David Cameron fired the starting gun on what will become an increasingly bitter campaign with Alex Salmond.

Following Scottish secretary, Michael Moore outlining plans to provide Holyrood with the powers needed to provide for a legally binding referendum, provided it was on a straight yes/no question, Alex Salmond trumped Westminster again by announcing a vote would take place in Autumn 2014, although he was at pains to argue that it had absolutely nothing at all to do with the 700th anniversary of the Battle of Bannockburn.

The week’s madness peaked on Wednesday with a rare display of unity at PMQs over the subject as Dave C agreed with Ed M and Ed agreed with Dave.

In his sketch for the Guardian on Wednesday, Simon Hoggart wrote of the week’s events:

The first Prime Minister’s Questions of 2012, and the main topic was Scottish independence. We will hear of little else for the next few years. Already the debate has achieved a mad, surreal air.

For example, someone in No 10 must have thought to themselves: “What the Scots really hate are posh, arrogant, public school-educated Englishmen who know what’s best for everyone else. So let’s put George Osborne in charge of the campaign to keep Scotland in the UK!”

Perhaps it’s a double bluff. As the SNP MP Angus Robertson pointed out on Tuesday: “The Conservative party has fewer MPs in Scotland than there are giant pandas in Edinburgh Zoo.” If Scotland does break away, it could guarantee Tory governments at Westminster for the foreseeable future.

So perhaps David Cameron is secretly in favour of breaking up the UK, and knows that the more he (and George Osborne) bang on about the need to keep the nation together, the more likely Scots will vote for separation. He stresses how much we all have in common, including “shared economic interests”.

I wonder if that includes the £65bn shovelled across as a bailout for the great Scottish banks, RBS and HBOS, more than £3,500 per English household?

“Meanwhile, the SNP position is even more confusing. As elucidated by Mr Robertson yesterday, the party won a large majority in the last Scottish election with a promise to hold a referendum. But because they have such a big majority, they have the right to hold the referendum whenever they please, ie when they think they are most likely to win it.

The SNP’s rousing battle-cry is: “Scotland demands the right to choose freedom! But not quite yet.”

“The contest for the future of the Union has yet to take place. But it is taking shape.”

Officially, shadow Welsh secretary, Peter Hain declared the proposals for new parliamentary constituencies in Wales, which will see the number of MPs cut from 40 to 30, were “diabolical”.

Unofficially however, Labour will have been relieved that it is the Tories and Lib Dems that look set to be the biggest losers from the review.

“Labour have used the G-word – gerrymander – but are privately relieved that their high-profile MPs should be able to avoid fighting each other in brutal selection contests for new seats. Where Labour-held seats disappear, natural retirements or the House of Lords may offer a way out.”

Of the other parties he continued:

“Plaid Cymru have highlighted some of the arguments put forward when the cut was initially suggested – that villages in the same community are being split and other communities are being joined despite being separated by mountains.

“The Liberal Democrats face uncertain futures in their heartlands, but life is more complicated for their Conservative coalition partners, the architects of the cut in MPs.

“There is a potential battle in Pembrokeshire between the government whip Stephen Crabb and Simon Hart.

“Glyn Davies, parliamentary private secretary to the secretary of state for Wales, whose Montgomeryshire seat is carved up, said he was “hugely disappointed by the changes”.”

Not to be outdone meanwhile by their nationalist brothers and sisters in Scotland, Simon Thomasm one of the candidates vying to take the leader’s post in Plaid Cymru, concluded the break-up of the United Kingdom was “inevitable”.

Outlining his thinking, the AM and former MP argued:

“Everyone in Wales tends to look at the SNP and think ’they are doing wonderfully’, but the SNP had to go about winning two general elections in Scotland first – and we have never won a general election yet.

“Unless we are serious about independence and serious about taking Wales forward, we have to set our aims on winning power and winning elections in Wales.

“Independence for me would mean the break-up of the UK as we know it. That may sound like the most ridiculous thing you’ve ever heard, but the UK as we know it today is only 90 years old. People tend to think that we’ve got some kind of long-lasting medieval kingdom here, it’s only been going around for less than a century.

“I don’t think it will last another century and there will be huge changes in the United Kingdom. Scotland may be the most obvious reason there, but Northern Ireland has an interesting future ahead of it – as does Wales.

Welcoming the move, an editorial for the Belfast Telegraph concluded:

“One of the most vexed issues in Northern Ireland is how to deal with remembering the past. This is partly because of the horrific experiences of people on all sides, and also the difficulty of reconciling each memory of that past.

“The pitfalls in handling this sensitive issue were well-illustrated by the Eames-Bradley report of several years ago. After long consultations it produced some useful ideas, but it never recovered from the recommendation of a £12,000 ‘recognition payment’ for the families of all victims.

“The search for a solution continues, and it is therefore a welcome sign that secretary of state Owen Paterson is attempting to chart a way forward with a series of separate meetings with the Stormont parties.

“One of the problems, however, is that so far there is no consensus, so finding a way forward will not be easy. The secretary of state is giving a lead by holding the meetings, but he is right to point out that it is not up to the Government to impose a solution.

“This is a matter for the Northern Ireland people themselves, and for the politicians who represent them. This will require a large element of give and take, and all sides will be required to show particular awareness of the particular sensitivities involved.”

As talks meanwhile continued over future appointments to the post of Justice Minister, both Sinn Fein and the DUP proposed the axing of the Alliance led Department for Employment and Learning in an attempt to trim the size of the Stormont government.

Threatening to resign as justice minister over the issue, Alliance leader, David Ford was unsurprisingly unconvinced by the suggestion, saying of the proposal:

“If they can change the system – not in any rational coherent way – but simply to spite us, then is there any reason why we shouldn’t assume that they will take justice off us, as soon as it suits them.

“This is a political carve-up, it is nothing to do with good government.”

• Sign up to receive our weekly summary of the news from Scotland, Wales and Northern Ireland, The Week Outside Westminster