Westminster fashionable talk dictates that we need to rebalance the economy towards manufacturing. But manufacturing is declining as a proportion of the world economy. 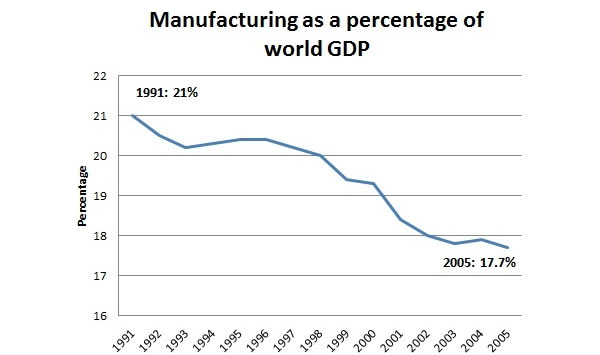 Manufacturing is great. It offers decently-paid jobs to those who want to develop their skills, rather than spend their lives in front of a keyboard. In many ways it is less risky than finance as a major driver of the economy.

Thus the great and the good sat around on a particularly weak edition of Newsnight last night – elsewhere in the programme a disabled activist with severe Crohn’s disease who has just had her benefits cut was queried as to why she was being nasty to the government – asking how we can rebalance the economy towards manufacturing.

Even in the country often hailed as the template for developed countries to follow in manufacturing, Germany, it has been a case of managed relative decline. As graph 2 shows, Manufacturing’s proportion of the German economy has fallen from more than 31 per cent in 1970 to less than 19 per cent in 2010 (statistics derived from United Nations data – calculations here). 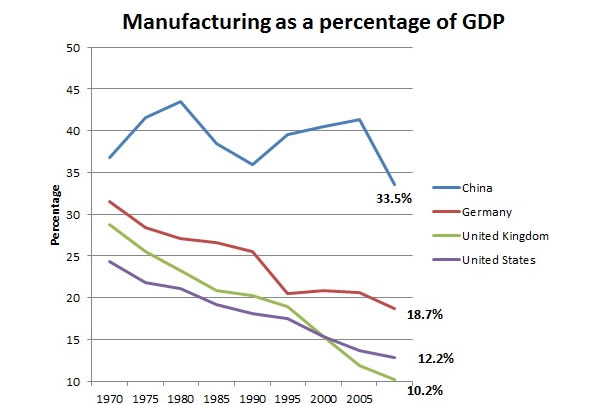 Ultimately, the only way to expand manufacturing as a proportion of your economy is to have a large inefficient agricultural sector, thereby producing an impoverished peasantry who are then drawn to factories and supply cheap labour. But since we aren’t China – or Britain in the late 1700s – this is not going to happen.

If we had more pro-manufacturing public policy, we could hang on to more of our manufacturing jobs and this would be a good thing. But any serious discussion around ‘rebalancing the economy towards manufacturing’ is ignorant.