Richard Exell runs through the latest figures from the labour market, and finds that "it is very weak and the prospects for unemployed people are very poor." 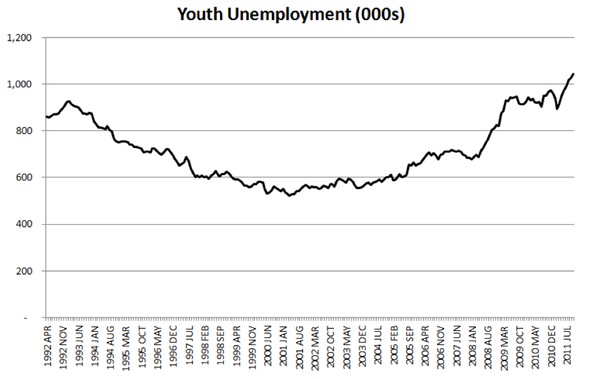 On the face of it, today’s employment figures were mixed.

The unemployment figures were as bloody as expected, reaching 2,685,000 in the three months from September to November. This is an increase of 118,000 from June – August and the highest level since July 1994. This is the sixth month running to have seen an increase – if unemployment continues to rise at this rate it will reach three million by July.

• The claimant count measure of unemployment rose 1,200, to 1,597,000. The rise was rather less than expected, but the five per cent claimant count rate remains the highest since August 1997.

Total employment rose, however, and David Cameron was keen to highlight this at prime minister’s questions:

“I think it’s noteworthy that, while the increase in unemployment is hugely unwelcome, there is still an increase in the number employed – another 18,000 in work.”

But the government should not take a great deal of comfort from this figure. The number of employees actually fell, but the overall employment figure rose because of a massive increase in self-employment:

This is the fourth month running when the number of employees has fallen and the number self-employed has risen.

A very interesting report today from John Philpott at the Chartered Institute of Personnel and Development looked at the Rise In Self-employment since the start of the recession.

CIPD provides very good reasons for believing that we haven’t had an increase in entrepreneurship, but a growing number of “odd jobbers”, willing to try their hand at anything to avoid being unemployed. This may be better than an increase in unemployment, if that’s the alternative, but it’s a sign of a weak labour market, not a strong one. 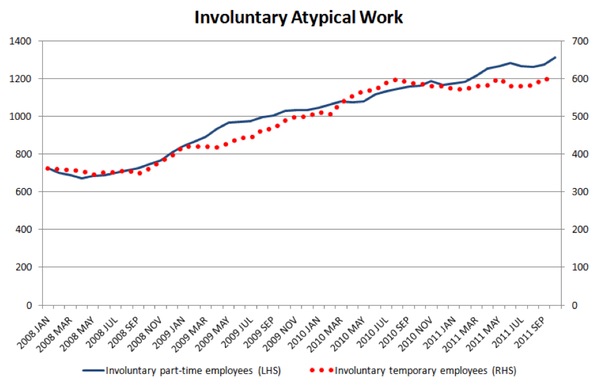 The increase in the numbers on government schemes is positive – I’ve complained here before about the low level of participation when unemployment is high and rising – but the 14 per cent increase in unpaid family workers certainly isn’t. Unpaid work is troubling and an increase can be a sign of a weak labour market.

And there are other signs of a weak labour market in today’s figures. On the quarter, the number of redundancies increased by nearly ten per cent, continuing what now looks like a trend, not a blip: 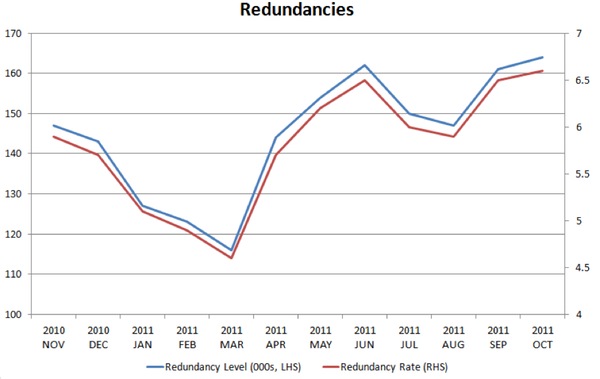 There are now 5.8 unemployed people for each job vacancy, up from 5.6 in the last quarter. Again, this looks like a trend, not a blip: 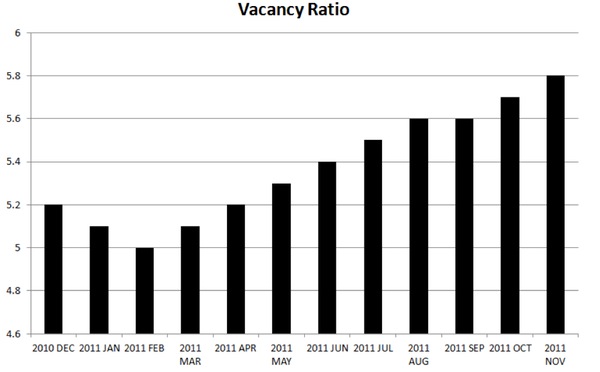 On top of these figures, we have

• The Federation of Small Businesses reporting yesterday that a net balance of 6.5 per cent of SMEs plan to cut the numbers they employ in the first quarter of 2012,

• The British Chambers of Commerce opining that businesses “do not seem optimistic about future recruitment”,

• The ITEM Club revising down their GDP and employment forecasts, and

• The Centre for Economics and Business Research concluding that the UK is already in recession and that unemployment will rise to three million within 18 months.

The Prime Minister is wrong: the labour market is very weak and the prospects for unemployed people are very poor.

• Unemployment: How Cameron and Clegg are letting the next generation down – Stephen Timms MP and Rachel Reeves MP, December 14th 2011

• Youth unemployment is still a cause for concern – Richard Exell, July 22nd 2011

25 Responses to ““The PM is wrong: the labour market is very weak””