The government has the power to do exactly what it says it can’t, and stop Stephen Hester, the director of the failed RBS bank, getting a million pound bonus. 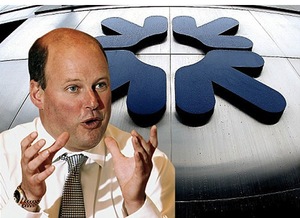 Oh dear, it’s the time of the year when executives of failing state-funded banks award themselves massive bonuses and the government’s only response is to say: ‘sorry guv, nothing we can do’.

Despite the fact that Britain’s biggest banks have seen their share-prices fall in 2011, and are hugely exposed to sovereign debt in Greece, Ireland and Italy, the annual bonus pot is set to be around £7 billion.

But we shouldn’t fall for the weasel words of Cameron and Osborne when they claim they are powerless to prevent Stephen Hester’s bonus.

In fact, EU legislation drafted in 2010 by Labour MEP Arlene McCarthy explicitly gives governments across the EU the power to ban bonuses to banks bailed-out by the state.

The purpose of the directive was bring the bonus culture of the financial sector back to reality, with limits on cash payments and rules that bonuses should be in shares or contingent capital so that executives would be rewarded for the long-term stability of their institution.

Here are the relevant sections of the third capital requirements directive:

Recital (12) CRD III Regarding entities that benefit from exceptional government intervention, priority should be given to building up their capital base and providing for recovery of taxpayer assistance. Any variable remuneration payments should reflect those priorities.

(i) variable remuneration is strictly limited as a percentage of net revenue where it is inconsistent with the maintenance of a sound capital base and timely exit from government support;

(iii) no variable remuneration is paid to the persons who effectively direct the business of the credit institution within the meaning of Article 11(1) unless justified;

EU wide guidance on the implementation of these rules, overseen by the European banking authority makes clear:

The competent authority could also require the institution not to award any variable remuneration as long as the government support is not yet paid back, or until a recovery plan for the institution is implemented/accomplished.

In other words, governments have the power to intervene on any bonus to a state-backed bank. Indeed, banks should build up their capital base and pay back the taxpayer before awarding themselves bonuses.

McCarthy, who is launching an inquiry on the implementation of the rules, said:

“The 2011 remuneration rules that the coalition signed up to and should have implemented, clearly give the government, as the major shareholder in RBS, the power to ban bonuses for directors of bailed out banks.

“If they weren’t prepared to ban bonuses, the government should have applied the remuneration rules which stipulate that 60 per cent of bonuses must be deferred and paid in instalments for at least three years.”

The hard economic facts are that, in 2011, the RBS share-price fell by over 40 per cent, costing taxpayers, who still own 81 per cent of the bank, around £23 billion.

Last, but not least, RBS has missed the government’s lending targets for British businesses. In other words, there are no grounds for Hester, or any of RBS’s executives, to be awarded six or seven-figure bonus packages. Ed Miliband and the Labour party agree. Even London Mayor Boris Johnson has described the payment as “utterly bewildering” adding that RBS should be “run on public sector lines”.

While City fat-cats may argue that big bonuses are needed to attract the best executives, the concept of a bonus is that it is awarded according to merit. And the coalition, which signed up to the EU law on bank bonuses, has the power to stop the payments for Hester and others. It’s time they had the guts to use it.

55 Responses to “The government has the power to stop Hester’s bonus, they just don’t want to”