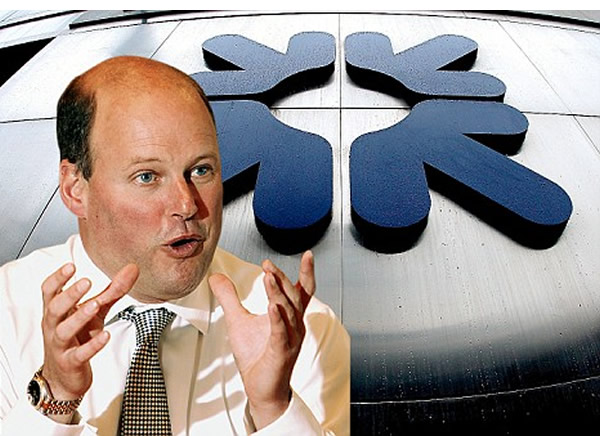 As winter’s icy chill blasts millions of Britons up and down the land, with wages frozen, jobs lost and benefits slashed – with even cancer patients and disabled children not spared by the Cabinet of the compassionless – for at least one individual, there’s reason to cheer.

That’s right, those responsible for the crisis are rolling in the dough once again, as if there’d been no recession, while those that had nothing to do with it are paying the price. Fair? Fair???

In a statement on Thursday night, the bank said Mr Hester would get a bonus of £963,000 as the taxpayer-backed lender bowed to political and public pressure to ensure its chief executive was not handed more than £1m.

However, the bank admitted Mr Hester was still potentially eligible for an award under a long-term incentive plan (LTIP) worth as much as £4.8m.

If Mr Hester were to receive his maximum LTIP grant it would take the total value of the awards made to him since he took over as chief executive in October 2008 to about £27.5m.

The actual value of these awards is likely to be substantially lower than this due to the collapse in RBS’s share price over the last 12 months.

“There’s a question of honour. Even if there’s a contractual opportunity for him to have a bonus it doesn’t mean he has to accept it… He is effectively a public servant in a bank which is almost completely owned by us the taxpayers.

“He needs to think like a public servant who has a duty to his country, not just his own wealth… No-one’s forcing him to take this money. He could struggle on with £1.2m.”

All in it together?

43 Responses to “All in it together? RBS fat cat “in line for £7m payout”. Seven. Million”