Lib Dem deputy leader Simon Hughes has called for England to have its own Parliament, while Scottish first minister Alex Salmond has come under fresh scrutiny. 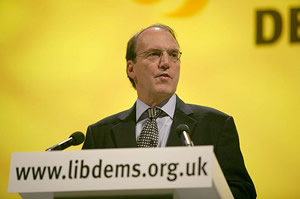 Sign up to our weekly “Week Outside Westminster” email service summarising the week’s news from Scotland, Wales and Northern Ireland

Lib Dem deputy leader Simon Hughes has ratcheted up the constitutional stakes over the future of the union by calling for England to be given its own Parliament.

Following a week which saw former Welsh and Northern Ireland secretary, Paul Murphy, calling for consideration to be given again to the idea of devolution within England and the establishment by the UK government of a commission to look at the West Lothian question, Hughes used a speech to Lib Dem members in Derby on Saturday evening to dub the on-going debate about the future of Scotland “an opportunity to make an important constitutional decision about the way we make laws in England in the future too”.

“The present system has become unjust to England and should not continue. At last we have an opportunity to correct this in this parliament.

“We now have a chance to make a decision which will be good for lawmaking, good for parliament, good for the public and good for all four corners of the United Kingdom.”

His remarks come ahead of a week that will see further steps being taken towards a referendum on Scottish independence.

Having been challenged by Nick Clegg on the Andrew Marr programme to provide greater clarity and answers about what an independent Scotland would look like, Alex Salmond will use Burns Day this Wednesday to publish the Scottish government’s consultation on a referendum which, according to the Sunday Mail, will include a wish list comprised of allowing 16 and 17 year olds to vote in the poll and holding the vote on a Saturday in Autumn 2014.

It is thought, however, that the SNP will cede to calls to allow the Electoral Commission to oversee the operation of the vote.

Looking ahead to the consultation’s publication, Salmond used an interview on Sky News’s Murnaghan programme to argue an independent Scotland would be fairer for England as well as Scotland.

Meanwhile, as the first minister continues to steamroll ahead with his plans for a referendum, the substance of his proposals have come in for attack from a group of senior, former ex-military chiefs.

Following Salmond outlining his vision on BBC Scotland last week of a Scottish Defence Force that would combine the army, navy and air force, the Sunday Telegraph has carried a series of criticisms from a group of former army commanders of the plans.

Declaring that the SNP Leader had “absolutely no grasp of how the British Armed Forces work”,  Lt Col Sir Andrew Ogilvy-Wedderburn spoke for those cited by concluding:

“This would lead to the downfall and demise of famous regiments, such as the Scots Guards and The Black Watch, as the soldiers would vote with their feet and leave because their pride would not allow them to serve with what is little more than a third world militia.”