Tony Burke looks at the state of the unions following the State of the Union address, where Obama called for America to reclaim the lead in manufacturing. 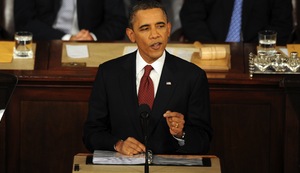 Barack Obama put American manufacturing at the top of the agenda in his State of the Union speech on Tuesday night – and slammed US companies who had outsourced jobs in a ‘’race to the bottom’ and the tax breaks they get for exporting manufacturing jobs. Commentators and unions said the speech led with more discussion of manufacturing than anyone has heard in years.

Obama set out the steps (but not a total programme) to start in-sourcing, and committed to building:

“An America that attracts a new generation of high-tech manufacturing and high-paying jobs.”

US unions such as the United Steelworkers reacted positively as Obama set out a ‘blueprint’ to put manufacturing at the heart of the US economy including:

• Pass tax cuts for manufacturing in the USA

• A trade enforcement unit to look at bringing cases against countries that cheat, use piracy, give subsidies – this was aimed at China

• Train skilled workers, with a national commitment to train two million with skills that will lead to a job and streamline the maze of training programmes

US unions said that the ‘blueprint’ had a number of solid steps that will help “stop the outsourcing and start the in-sourcing.”

Obama also praised US companies such as Milwaukee’s Master Lock (which he referred to as a unionised company) for bringing work back to the USA.

In a sideswipe at US corporations and banks he said that the US had to see itself as a country mutually supporting each other and that they had to abandon the “each of us on our own” and selfish, “in it only for ourselves” mentality where companies believe in an “ideological fantasy that government is in the way”.

And he told Wall Street:

“Banks had made huge bets and bonuses with other people’s money. Regulators had looked the other way. It was wrong. It was irresponsible.”

What the speech lacked was a manufacturing strategy and in taking on Wall Street, talking about taxing the rich, Obama was putting down markers.

There was also no reference to the demand from US unions that companies cease their ‘war on workers’. Perhaps, one commentator said, he was saving them for another day – during the election campaign! We shall see.

• Celebrating the influence of player unions in US sport – Ruwan Subasinghe, March 14th 2011

• IDS should proceed with caution when looking to emulate US welfare reforms – Sophia Parker, November 10th 2010

22 Responses to “Obama puts manufacturing top of the agenda – time for Cameron to do the same?”