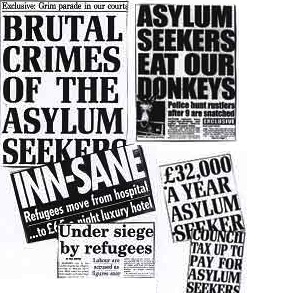 Don Flynn is the director of the Migrants’ Rights Network

Today’s article in the Daily Telegraph by employment minister Chris Grayling and immigration minister Damian Green gives a picture of hundreds of thousands migrants arriving and marching straight down to the job centres to claim benefits.

Whipping up a storm of innuendo and misrepresentation, they link students, tourists and people “coming in the backs of lorries” to the fact that 370,000 claiming work-related social security benefits were born abroad.

Of this 370,000, over one-half are actually British citizens. They didn’t arrive here yesterday – many will have come ten, twenty or more years ago.

Another point: 370,000 sounds like a big figure, but it represents a fraction of just over 6 per cent of the 5.5 million people in receipt of these benefits. Not such a large figure after all.

It might also be worth mentioning that people born abroad make up around 14 per cent of the UK workforce. If they were represented in that proportion amongst benefit claimants we’d need many more of these ‘foreigners’ to get down to the dole queue and sign on.

The statistics the ministers are quoting also say nothing about the real cost of the benefits claimants – both foreign-born and native – to the public purse. It’s all very well saying on such-and-such a date 6 per cent of social welfare recipients were born abroad, but how many were amongst the long-term unemployed, and how many just needed help for a month or so before their next job turned up?

Anyone closer to the ground in this debate knows that benefits are only paid out when strict tests of entitlement are gone through by social security officials.

Most non-EU migrants who have arrived within the previous five years (two years if the spouse or partner of a person settled here) are barred from receiving the large number of income-related, child and incapacity benefits which figure on the immigration rule’s ‘public funds’ list.

Even EU nationals, who are supposed to have the same rights as UK citizens in these matters, have to have been in employment or self-employment, or the partners of someone who has, and to show that they are ‘habitually resident’ in the UK before they receive benefits.

So why has the government released these numbers now? When so much of the news about the economy and unemployment is as dire as it is, and the tsunami of joblessness that is now sweeping over us is associated with austerity measures, is it any surprise that some of its ministers are yet again speaking about migration and abuse of the system?