Dr Kailash Chand OBE highlights the global nature of the occupy movement by showing its links with the Anna Hazare anti-corruption movement in India. 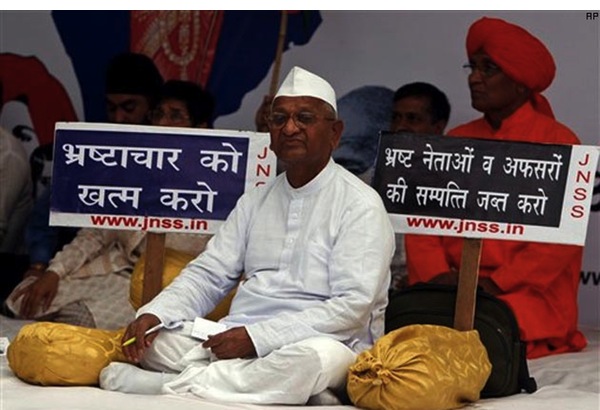 From Greece to London; from Spain to Syria; from the occupiers in Zuccotti Park to the milling crowds at Ramlila ground – the forms are different but the anger and frustration of the people with the state of affairs is the same.

Be it the denial of human rights or economic deprivation, be it a clean system of governance or lack of transparency, be it price rise or corruption, the anger of the people is directed against those responsible for the manifold multiplication of their problems. It may be premature to draw parallels but only the naïve would miss the common thread running through such movements across the globe.

Analysts, many of whom represent the interests of the establishment are busy dishing out local, regional and social explanations for this world wide unrest because they would not likes to challenge the system that has benefitted them so long.

Sooner or later the world has to recognize that at the root of this unrest lies in the unviable economic system, concentration of power and wealth in a few hands and the unabashed corporate greed.

One cannot treat a malady without finding the bug that causes the ailment. People in the more advanced western democracies have been closer to the diagnosis while in countries like India we are striking at the symptoms of the disease.

While the slogans in the west are “one per cent versus 99 per cent”, “fight the rich, not their wars” and “human need, not corporate greed” the ire in India is directed against the scheming politician, the bribe taking babu or the Hawala trader with Swiss accounts.

In India the contribution of big business and the corporate world to the all prevailing corruption and social degeneration has not received the attention it deserves. Even the more ‘enlightened’ and ‘educated’ organizers and supporters of the Anna movement are silent on this issue. The western protester seems to be more aware of the reality.

The common man in India is perhaps too harassed by the day to day corruption, bribery, human rights violations etc to look beyond his nose and indentify the real culprit. In fact a section of the middle class is in awe of the corporate culture and views them as ‘achievers’ rather than ‘usurpers’. They are willing to be fodder for the corporate machine in the false hope of being in the driver’s seat sooner or later.

Their beliefs were strengthened by a corporate controlled media and entertainment industry that presented a rosy picture of the system run by them and a distorted picture of any economic system different than theirs.

Bedazzled by the glitter of wealth and extravagance; oblivious of the ugly reality that was clothed in an attractive attire of democracy and free market; the educated middle class in India has been behaving like hypnotised zombies.

The global discontent against the status quo is an indication that the zombies are coming out of the hypnotic spell. They may not be able to pin point the malady in political, social and economic terms but they are very near the mark.

The diehard supporters of the system are loath to admit this and are using all the tricks in the trade to ignore, belittle or defame this movement. One finds a striking similarity in the tactics of the critics of the occupiers and the detractors of the Anna movement.

Such commentators are either divorced from reality or are consciously trying to prevent the inevitable: the overthrow of an unviable, undemocratic, one sided political and economic dispensation. The weaknesses of capitalism stand exposed. It is not only a bad economic system but a poor democracy as well.

The real face of democracy is apparent from the fact that the biggest exporter of democracy is busy these days firing plastic bullets and tear gas shells on the protestors.

This what Stephen Lendman, radio host and author says about the system:

“Whoever controls the power of money has supreme power.

Recent reports from the US have exposed the tall claims of this country on human rights and freedom to protest.

“Civil disobedience will not be tolerated.”

“A new chapter in the annals of American police brutality has been written, as two Vietnam war veterans who joined Occupy Boston protests suffered injuries after being beaten by police and arrested along with some 50 other demonstrators.”

“In New York a section of Occupy Wall Street protesters are planning a “millionaires march” to wealthy Manhattan residents’ homes.

“The action is being planned by UnitedNY, the Strong Economy for All Coalition, the Working Families Party, and New York Communities for Change, all of whom helped swell the largest Occupy Wall Street march so far last Wednesday”.

If the ‘experts’ are unable to see a precursor of a class division in the “millionaires march” they are either pretending or being a bit too clever.

The Indian middle class and their largely apolitical leadership have not yet grasped the dangerous dimensions of the ‘new world order’. The middle class is being rapidly pushed downwards as a result of price rise, increased cost of housing and shrinking job opportunities. The agriculture sector, an important component of Indian economy is severely affected by a slow growth.

On the other hand despite recession the number of the super rich has gone up. India has 55 billionaires, according to 2011 Forbes’ list. The combined fortune of the wealthiest citizens in India was pegged at about $247 billion by Forbes, which was well above 2010 total of $222 billion.

India has been aptly called “a rich country, where poor live.”

Indian rulers are ignoring the writing on the wall and are persisting with implementation of a western style economic system. And the common man is yet to realize and see the negative impact of corporate greed and power on their day to day life.

They dictate government policies; they corrupt government officials and have no hesitation in sabotaging the public sector enterprise. While they pay a pittance to their employees they fix absurd and astronomical salaries for themselves and their CEOs at the cost of shareholders. They oppose subsidy for the poor but want more for themselves in the form of SEZs, excise concessions and tax holidays.

How much they owe to the nation in the form of bank default, tax arrears, and Swiss Bank Accounts is not revealed to the nation. The tree of corruption gets its nutrition through its corporate roots. The wily politician, the bribe taking bureaucrat, the crafty middle man; they are all the front men of the corporate word.

Despite all this they are projected as image builders and flag bearers of the nation by the corporate controlled media and governments alike.

Successive governments of the “free world” have not only allowed this pathological greed for money to flourish but have actually helped it to grow into a monster that is threatening to devour the very system that created it.

This monster is not only cornering all the wealth and resources but is devouring the very fabric of society. Ethics and morality have been relegated to the background; money, money and more money is the modern mantra of success.

Gone are the days when intellectuals, poets, teachers, philosophers were the role models. The role models today are the successful and the only parameter of success is accumulation of assets or wealth for their companies.

The destruction of the value system, the deterioration of living standards, the concentration of wealth in a few hands and the blatant misuse of money as power to manipulate governments was bound to take its toll. The frustration, the anger and despair has burst out in the form of a global protest. The 99 per cent in the US are already braving plastic bullets and tear gas shells of the one per cent.

In the absence of a competent leadership there is always the danger of this movement losing its way.

World over there is a huge a vacuum of leadership for many reasons. The society has been systematically depoliticized by a corporate controlled media and entertainment industry. One hardly comes across a movie, a TV serial or a theater show that highlights any social issues. The emphasis is on religion, superstition and fundamentalism.

In such circumstances what type of leadership can one hope for?

The mainstream left has not just abdicated its responsibility but has covertly crossed the fence.

What is left of the left has been so demonized by the corporate controlled media that many genuine activists are avoiding the label. David stands alone with his sling broken and half the stones stolen. It is a tribute to his grit that he is still standing.

In fact the people are ahead of the leaders. Whether or not the protests evolve into a significant political force with a clear agenda or a concrete set of demands remains to be seen.

For this to happen, India needs more than anything a mass social and political movement to reassert the democratic control over the economy and the State and to effectively end the control of the corporate-driven neoliberal capitalism. The ‘Occupy Wall Street’ movement offers just the spark to trigger such a movement needed in India.

Will the civil society throw up a leadership that has the political maturity to indentify the genesis of the present moral, social, political and economic crisis? Will the progressive left in India rise to the occasion and grab this opportunity?