Tony Burke presents the bad news about UK manufacturing, and asks what the government is doing to improve the situation. 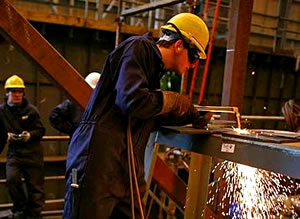 It has been a gloomy start to 2012 so far for the government. Not two weeks into the New Year and worse than expected manufacturing figures for the last quarter of 2011 – the worst since 2009.

We have also seen the Bank of England’s ‘credit trends’ report making grim reading for manufacturing companies, especially small and medium sized businesses – the very companies who were supposed to be leading the way out of recession and helping create work for the thousands of public sector workers who are losing their jobs.

The Bank’s report shows that credit for companies is now becoming scarce and expensive. According to the quarterly credit trends report for the fourth quarter of 2011, banks are raising rates on loans they make to business and plan to toughen the covenants on new loans. This tougher lending environment will damage the UK’s manufacturing sector.

The report also undermines the government’s long promised policy of re-balancing of the economy. The reality is that it has not got off the ground. Cameron has said recently:

“In places there is a re-balancing taking place but it’s not going as far and as fast as I would like it to and we need to do better on that front.”

Do better? The problem is that the government just doesn’t get it.

In order for manufacturing to grow businesses need access to loans and credit and one way to do this is through a strategic investment bank to help UK manufacturing companies to access finance and support.

The UK’s small and medium sized companies, which make up 80 per cent of manufacturing in the UK, are desperate for access for finance. How much worse does it have to get before the government acts?

This report also follows poor figures for manufacturing output at the end of 2011. The Markit Purchasing Managers Index survey, which asked manufacturers about their output and order books, showed a reading of 49.6 last month (December 2011). This is a tiny improvement on the 47.7 recorded in November 2011, but still below the 50 mark which signals the sector is expanding.

With the UK ‘s influence in Europe marginalised, Cameron has had to admit that he did not achieve a “safeguard for the UK”. Stagnation and a double dip recession are looming and the government has no idea how to guide us through it.

12 Responses to “Manufacturing’s recovery ends before it starts”