In the wake of the Luis Suarez and Diane Abbott race rows, Shamik Das looks at the tribal backing received from their supporters, despite being in the wrong. 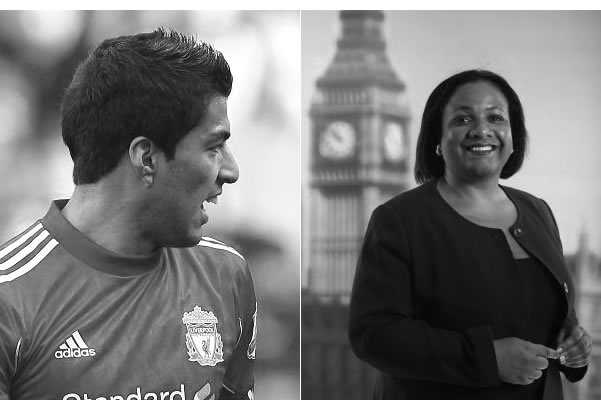 Another day, another story about racism, another race row – with Diane Abbott in the spotlight today for her offensive remarks about how “white people love playing ‘divide and rule'”. She has since deleted the tweet and issued an apology, not for the comments themselves but “for any offence caused” – the classic non-apology.

Yet it is Labour’s slow response (though the party did at least, belatedly, issue a condemnation, albeit not as promptly or sternly as Nick Clegg), and moreover the response of Labour supporters and left-wingers, who have rallied to Abbott’s defence, that will bemuse, frustrate and raise as many questions about judgement. On Twitter, Facebook and in blogs, there has been a closing of ranks, an inability to see any wrong, and attacks on those criticising Abbott.

Remind you of anything? The tribal, unswerving allegiances and loyalty are straight out of the Liverpool “back ’em at all costs, it’s us v them” mentality that saw the club, manager and supporters back Luis Suarez to the hilt during the recent racism row following his clash with Patrice Evra, right up to Suarez’s eventual “if it offends anyone then I want to apologise for that” semi-contrition last night.

The Abbott and Suarez cases are of course not identical, and Ed Miliband’s response is better than that of Kenny Dalgliesh, but the reaction of many Labour supporters echoes that of the die-hard Liverpool fans.

“Luis Suárez, Liverpool Football Club and legions of their fans seem bewildered that the word negrito directed at a black man in the course of an argument would lead the individual concerned to assume that he had been racially abused…

“So this unedifying spat continues with Liverpool supporters – almost to a man – behind Suárez.

“It is embarrassing. Is it not possible for Liverpool fans to have some empathy with Evra? To see that he felt racially abused? Seemingly not in the pathetically tribal world of football, where basic decencies are thrown out the window and the “my club right or wrong” ethic prevails.”

The same sentiments of “embarrassing” and “pathetically tribal” could be applied to those unreservedly backing Abbott.

For the Liverpool and Labour/lefty loyalists, the next time one of their own is offended, or someone from an opposing team offends them, they will express outrage, of that you can be sure; their non-condemnatory response to the offence caused by Suarez and Abbott, however, lessens the impact, the authority, the effectiveness those future howls of outrage will have.

• Stephen Lawrence: The legacy that lives on, the hope, the dreams of a better future – Shamik Das, January 4th 2012