Our guide to the Iowa caucus - this is the choice facing the Republican primary voters: The flip-flopper, the hypocrite, the eccentric or the incoherent Texan. 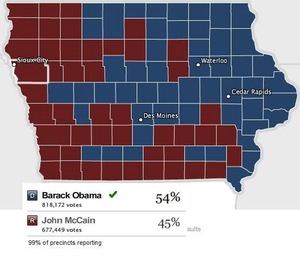 While for most people in Britain January 3rd means a return to work, for one state in America it involves something completely different… Left Foot Forward’s Chris Tarquini reports

The famous Iowa Caucus 2012 is the first vote in the Democratic and Republican party primaries as the latter seek to find a candidate to defeat 2008 Iowa Caucus winner Barack Obama. While the President is unlikely to face any real primary challenge at all the GOP will be desperate to start on the path to finding a credible alternative to the embattled Obama.

Here’s our preview of the contenders:

The Republican Party have a reputation for nominating the candidate who came second in the last primary (see John McCain in 2008) and this election looked like it may be no different.

The Former Governor of Massachusetts had an organisation left over from 2008 and far more money than any of his opponents, however GOP voters just simply seem to not like him.

Outside of his New England stronghold Romney has been struggling to get more than 25 per cent support despite a barrage of advertising and strong name recognition:

Romney’s problems are too complex to explain in anything but a 500-page book but it essentially breaks down to one key factor – he is a ‘flip-flopper’.

Following his failed senate bid in 1994 he was elected Governor of Massachusetts by taking a ‘moderate stance’ on a host of issues, most notably abortion rights. This has left many GOP voters unable to forgive him and explains why despite being a steady frontrunner he cannot seal the deal.

However, after his strong second place in Iowa last time round and a huge amount of support in New Hampshire, Romney will be looking to sneak a win in Iowa against divided opposition and end the race before it even begins. With the Republican polling numbers as volatile as they are, he may well do it.

The former Speaker of the U.S. House of Representatives was seen as a political corpse after his campaign essentially collapsed last summer, however Romney’s failure to gain traction and strong debate performances have seen him catapulted into the top tier of candidates.

There is no doubt he has the experience and intelligence as well as fiery and articulate rhetoric to do well.

Despite these strengths Gingrich himself has himself flip-flopped on key issues in the past, including his now infamous video on climate change action alongside liberal former Speaker Nancy Pelosi:

This is before one considers his personal history of affairs which included getting his now ex-wife to sign divorce papers while she lay in hospital recovering from cancer.

Following his rise in the polls Mitt Romney’s ‘unaffiliated’ super PACs (run by a host of former Romney staffers) saturated the Iowa airwaves with attacks ad on Gingrich, who now sits in third place in most of the state polling.

Despite his lack of money and organisation he is appealing to an angry section of the GOP electorate who could be decisive in the upcoming vote and with a huge lead in the South Carolina primary it would be difficult to count out the Georgia firebrand just yet.

Ron Paul is one candidate who can certainly not be accused of flip-flopping. The libertarian congressman has a cult following amongst some of the Republican party and current polling shows him leading the pack in Iowa.

A constant voice for fiscal restraint, Paul has steadily grown in the polls and could be primed for a caucus win.

However, his libertarian leanings are seen as too far-right for even the Republican base in many cases and his isolationist foreign policy and liberal attitude to social issues does not play well amongst defence or social conservatives, key parts of the Republican coalition.

Whether his passionate fan base can help him overcome these struggles on caucus night remains to be seen.

Rick Perry seemed to have it all. Tall, handsome, charming and well funded, the Texas Governor was leading one of the top states for job creation in the nation.

However, a host of horrendous debate performance culminating in his now infamous ‘oops’ moment led to a collapse in poll numbers as the former GOP golden boy looked more like just a boy:

His well-funded campaign have hit back with a host of ads trying to position him as a political outsider and many pundits are predicting a second surge but by then it may be too late.

He could make a late play in Iowa but it will be tough for him to overcome his image as being the first politician to be worse at public speaking than his Texas compatriot, George W Bush.

Rick Santorum may feel hard done by that he has not had his moment in the bright lights of the race like some of his political rivals. A proven conservative ex-Senator from a crucial swing state (Pennsylvania), Santorum has run on social issues including family and his opposition to gay marriage and other generic ‘culture war’ issues.

His debates have been pretty good, however maybe due to a lack of finance it seems he has not been able to gain traction.

Certainly he needs to be considered as the dark horse of the race but try not to google his name, you’ll get a surprise as to what else it means…

The congresswoman who helped push Tim Pawlenty out of the race after her win in the Iowa straw poll a few months ago, the extremely conservative Bachmann became a shock front-runner in the polls early on.

Certainly she has improved as a candidate over the past months and has a small but passionate following who remember her angry opposition to what she dubs ‘Obamacare’ as well as her cringe-inducing ‘small town American’ outlook.

It seems she has been squeezed out of the race by better financed and more experienced candidates and if her shrinking poll numbers are anything to go by, barring a miracle she should be considering who to endorse rather than where she will sit in the oval office.

Huntsman seemed like an obvious choice. A well funded political action committee, good looks, fluent Mandarin and a strong conservative record meant he should be a top tier candidate.

However, his decision early on to appear as a moderate candidate by doing such insane things as believing in climate change and evolution (crazy hey?!) have left him struggling for support outside of New Hampshire, where he has been all over the television and campaigning relentlessly.

The media certainly love him and his numbers are growing with even leading conservative journalists singing his praises, however failing a huge last minute surge in New Hampshire it could be over before it begins for the former Utah Governor.

Of course former candidates Herman Cain and Tim Pawlenty are no longer in the race, with the latter in particular probably kicking himself. Other candidates such as Buddy Roemer really seem not to have any support above the one per cent mark due to poor finances and lack of media interest.

What has already been one of the most bizarre GOP races of all time could be over quick if Romney can take Iowa and New Hampshire and squeeze out opposition, however a late Perry surge or a resilient Gingrich could provide stiff competition if they were to take the granite state on January 3rd.

The voters have a choice: the flip-flopper, the hypocrite, the eccentric or the incoherent Texan. Which of these choices the GOP set up against President Obama could shape the direction of the party for years to come.