On Monday, yet more disappointing growth forecasts came in for the economy. Ernst and Young’s ITEM club predicted 0.2 per cent growth in GDP for UK in 2012, down from their previous forecast, while the manufacturing organisation EEF plumped for a meagre 1 per cent.

Such downgrades barely make news anymore, and it was a long way down the news bulletins’ running orders. But low or non-existent growth in the economy is a double tragedy.

Not only does it mean fewer jobs and less well-paid jobs, but also makes it even harder to bring down the deficit.

The government and its supporters continue to insist that what we face is, at bottom, a crisis of debts and deficit. Therefore, if we cut discretionary spending (i.e. spending on the things we like) we can rebalance the books and the economy will recover.

However, as right-wing commentators have helpfully pointed out “there are no cuts” – or at least there is a relatively small fall in overall spending.

That’s because as discretionary spending falls it takes demand out of the economy leading to fewer tax receipts and more mandatory spending – spending on things we would rather not be spending on but have no choice as to do so, like Jobseekers’ Allowance and debt interest.

Given how hard it is to translate cuts in discretionary spending to reducing the deficit, it would suggest that an analysis that puts a lack of growth at the heart of understanding the economic crisis is more helpful.

As Left Foot Forward has consistently argued, the deficit is largely a symptom, lack of growth is largely the cause. And, as you would imagine, the Office for Budget Responsibility’s (OBR) forecasts for growth and the deficit are closely correlated.

As can be seen from a scatterplot, the two are clearly related: 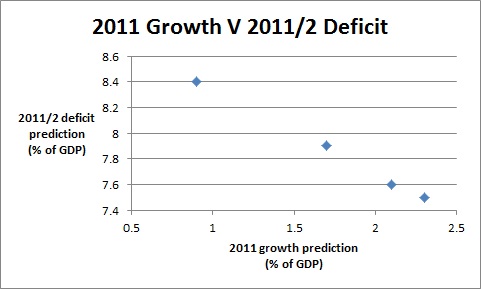 And indeed, when we run the main statistical test for correllation between two continuous variables – Pearson’s Correlation Co-efficient, we find a rating of -0.99 out of a range of 1 to -1. That means that they are almost perfectly negatively correlated – as growth declines, the deficit goes up.

Statistical significance tells us what the chances are that this relationship came out by random chance. With only four data points, one might not expect the correlation to be statistically significant.

However, growth and debt forecasts are so well correlated that the statistical signicance is (p<0.001) – that is there is a less than 0.1 per cent chance that the relationship was produced by random variation.

We can even generate an equation to describe the relationship between the OBR’s predictions of growth in 2011 and the deficit in 2011/2, using an ordinary least squares regression. It calculates that the Deficit = 8.9913 – (0.6522 x growth).

It can be seen from the scatterplot, that while not as strongly correlated as the 2011 figures, there is still a clear relationship between growth in 2012 and the deficit in 2012/3, according to the Office for Budget Responsibility: 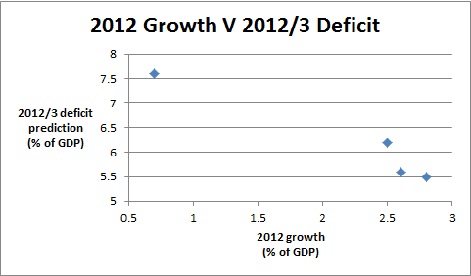 These figures are almost as strongly correlated as the 2011 figures, given a Pearson’s Correllation Co-efficient of -0.97. The strong correlation means that the relationship is still statistically significant at (p<0.05). That is, the chance that the relationship between the two is due to random variation is less than 5 per cent.

Secondly, as the OBR releases more predictions of growth and deficit, we will update the model accordingly. The predictor will live in our sidebar, where you can enter your prediction for growth in 2012, and see what deficit is likely to be produced.

• The Perversity of Dan Hannan and “There are no cuts” brigade – Daniel Elton, December 3rd 2012

• Without growth will we even halve the deficit – Cormac Hollingsworth, September 20th 2011