This morning, the Child Poverty Action Group have exposed the six myths of work and pensions secretary Iain Duncan Smith’s regressive reforms; here they are. 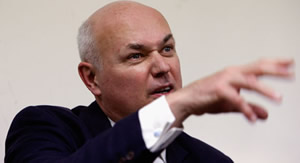 The government faces a battle in the House of Lords today over its controversial benefits cap, with bishops joining Liberal Democrat peers – led by former leader Paddy Ashdown – in opposition to the plans that will push 100,000 children into poverty. In 2012. Under this cabinet of millionaires.

Myth 1: The cap is just for out of work claimants of benefits

Ministers have fostered the impression that this is about ensuring working families get a fair deal compared to those who don’t work. However, ministers confirmed in their impact assessment document that any couple working up to 23 hours a week will still be affected by the cap when it is introduced.

That means that many families not in receipt of any out-of-work benefits (e.g. jobseekers’ allowance (JSA), income support (IS) and employment support allowance (ESA)) and receiving just earnings, tax credits and in work benefits (e.g. housing benefit (HB) and council tax benefit (CTB)) will be hit by the cap too.

Source: For the government’s confirmation that Working Tax Credit – with its 24 hours of work requirement – will be used as indicative of being in work for the cap policy, see the impact assessment (pdf).

Most of those hit by the cap will be in private rented households. It is the landlords that get the cash – often paid directly to them – meaning the families are really left struggling to pay for basic costs like utility bills, food, clothes, transport etc. The root problem of rising housing benefit costs is the failure to maintain sufficient supplies of social housing, and the runaway inflation of private rents due to the bubble in the housing market.

The cap does nothing about the root problem and the crisis in the supply of affordable housing is predicted to worsen by housing experts.

Myth 3: Families with a disabled member will not be affected

Disability living allowance (DLA), then the personal independence payment (PIP), will be used as a proxy to identify households that will be excluded from the cap on grounds of disability. However, many disabled people do not qualify for DLA – and even fewer will qualify for PIP.

The government has admitted they expect half of the households hit by the cap to have a disabled person, using the Disability Discrimination Act 2010 definition. Poor decision making for DLA claims with high rates of successful appeals will also mean many families going in and out of the cap unfairly, causing chaos, debt and homelessness.

Source: For the government’s statement, see answer to PQ 68034.

Myth 4: There will be no behavioural changes and social impacts

The government’s impact assessment has assumed that there will be no behavioural changes, and states that there will be no social impacts. However, the measure introduces a couple penalty that will mean some families may be able to receive twice as much in benefit payments if they separate.

A couple with at least two children who are subject to the £500 cap could claim up to £1,000 in benefits if the parents separate and divide the residency of their children between two homes. The incentive for families to break up will not just be financial, as it may also mean that they are able to remain living in the same area so that they can avoid their children changing schools and continue living in the same neighbourhood as networks of friends and relations.

The cap is likely to reduce benefits spending by £240 million per annum, but it will lead to costs elsewhere in the system that may surpass those savings. Warnings from within government suggest there will be a net fiscal cost.

Source: You can read the full warning letter here.

This policy has in fact been tried and failed once before. The ‘wage stop’ in force during the 1970s was a similar policy which aimed to cap benefits at the level of average wages. It proved unfair and unworkable and was eventually abolished.

Source: For more information on the wage stop, see this speech by Robin Cook who successfully campaigned for its abolition.

There’s more on the horror of the reforms in today’s Guardian, which looks at the case of Daniela Pereira:

Last year Daniela Pereira, 28, moved from Kensington to Peckham in order to reduce her rent before the changes but now is having to move again because her age – under 35 – means she can only get housing benefit if she is living in shared accommodation.

“I have a disability, so it’s a bit difficult for me to live in shared houses. I can’t use stairs or do things like the dishes or cleaning up ,so it really impacts on what I can find.”

Pereira worked in catering until developing psoriatic arthritis which makes it difficult for her to walk.

“I was living in Cornwall, but I came to London because I thought it would be easier for me, finding a job, accessing doctors and physio appointments. Peckham was about the cheapest I could find, and I can just about afford food too, but nothing else. I don’t know where to go.

“I’m not being supported to find work. It’s as if they want me to be stuck on benefits for the rest of my life. I don’t want that.”

“The household benefit cap policy is built on a foundation of myths, but the 210,000 children affected will face harsh realities of severe poverty and homelessness.

“The Bishops in the House of Lords will be putting forward some sensible proposals today that will protect children and families. We hope a government that promised to be the most family friendly ever will prove it today by following their lead.”

Once again, the government of the one per cent are balancing the books on the backs of the poorest… all in it together?

• One and half cheers for Lib Dem opposition to Osborne’s benefit cap – Declan Gaffney, May 17th 2011

143 Responses to “Exposed: The six myths of IDS’s benefits cap”