In Glasgow today, Ed Miliband will seek to go beyond the process-driven debate over independence for Scotland, seeking to make a positive case for the Union. 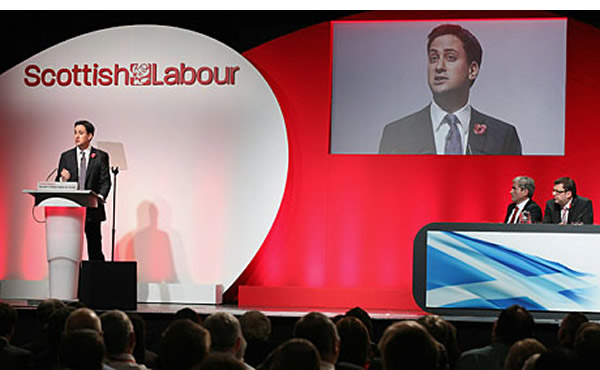 In a speech in Glasgow later today, Ed Miliband will seek to go beyond the process-driven debate over independence for Scotland, seeking to make a positive case for Scotland to remain within the Union.

In a direct response to first minister Alex Salmond – who last week used the Hugo Young Lecture to argue social progress north and south of the border would best be achieved by enabling an independent Scotland to become a “beacon for progressive opinion” – Miliband will say:

“I say let’s confront the real divide in our society. Not between Scotland and the rest of the United Kingdom. But between the haves and the have-nots.

“So I am not here to tell Scots that Scotland cannot survive outside the United Kingdom. But I am here to tell you that we need to make Scotland, England, Wales, and Northern Ireland, a fairer, more just, place to live. And we can do this best together.”

Speaking of his “humility” at the scale of the task confronted by Scottish Labour, the Leader of the Opposition will add:

“I come here today with humility about the scale of challenge for Labour – just nine months after we lost the Scottish elections.

“With admiration for Johann Lamont – the first leader of Scottish Labour – who has shown she understands the scale of the challenge and Labour’s need to change. And with determination to play my part supporting her in the long campaign for the United Kingdom.”

Miliband will deliver his speech following a weekend of yet more debate and discussions over Scotland and its future.

* Speaking to the Sunday Mail in Scotland, former chancellor Alistair Darling gave the biggest hint so far that he is ready to take a leading role in the campaign against independence, declaring:

“I am ready to do everything I can. It is something I believe in. I am passionate about this.”

* The Scottish Sunday Express carried a poll showing 51% of people in Scotland support independence, coming days after the New Statesman put the ‘yes to independence’ campaign just one percentage point behind those against.

* After Alex Hern wrote on Left Foot Forward on Friday of Alex Salmond’s proposed referendum question being a “textbook example of a leading question”, the Daily Record said of polling it had commissioned:

“We tested two different questions asking if Scotland should be independent.

“Support for independence was just 36 per cent using a Labour version which asked: ‘Do you want Scotland to be an independent country or not?’

“But it rose to 46 per cent when we posed Salmond’s proposed question: ‘Do you agree that Scotland should be an independent country?’”

* Salmond’s vision of an independent Scotland attracting global investors with ultra-low corporation tax was dismissed as “a fantasy”.

Quoted in the Herald, Professor John Kay, who served on the first minister’s Council of Economic Advisers during the last Parliament declared:

“No-one is going to allow Scotland to have a low corporation tax. That’s just a fantasy.

“If Scotland’s an independent country, the EU will not allow it. It’s a non-starter. What has happened on corporation tax is Ireland has this low rate and everyone around the EU is determined that that should never happen again.

“So Scotland would have to negotiate EU membership – it wouldn’t be difficult, everyone’s going to have Scotland as a member – but you can be absolutely sure that one of the conditions is that you don’t have a 12.5% corporation tax rate.

“Since a fuss has been made in Scotland about doing that, it would be inevitable that you would get the determination on the part of the Europeans that you do not have it.”

• Salmond has questions to answer, because the evidence doesn’t support him – William Bain MP

23 Responses to “Miliband to outline vision of a fairer Union”