Ed Miliband will today warn only Labour can deliver fairness in straitened times, and that whoever wins the next election will have to deal with a big deficit. 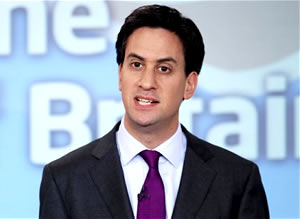 Ed Miliband will today warn that only Labour can deliver fairness in these straitened times, and that whoever wins the next election will have to deal with a big deficit. In a speech to London Citizens on the South Bank this morning, Miliband will say that, if the winners are Labour, the party will have to govern in a different way to the last time it was in power.

On the challenges of governing under the specter of the deficit, he will say:

“We always said the deficit had to be reduced. But in a steady and balanced way. And we warned that trying to cut spending and raise taxes too far and too fast would make it harder to get that deficit down. The government has proved that prediction was correct in just 18 months.

“Whoever is the next prime minister will not have money to spend. We will have to make difficult choices that all of us wish we did not have to make. Labour knows what fairness means. It always will. But we must rethink how we achieve it for Britain.

“The ideas which won three elections between 1997 and 2005 won’t be the ideas which will win the election in 2015. So we will be a different party from the one we were in the past. A changed Labour Party.”

Following his attack last November that fairness “is not in David Cameron’s DNA”, Miliband will say the prime minsiter will only offer “more of the same” in answer to the country’s problems:

“Everyone is now joining us talking about the squeezed middle, the next generation and responsible capitalism.

“But it’s not enough just to talk about them. Suddenly David Cameron is falling over himself to say he too is burning with passion to take on ‘crony capitalism’. Now he has accepted this the battleground of politics, I say: ‘Bring it on.’

“The core belief of David Cameron is that we can solve the problems Britain faces by government getting out of the way. His answer to the problems thrown up by an economic crisis caused by faith in free market fundamentalism, is simply more of the same.

“My answer is different. Different to this prime minister. And different too to the previous Labour government.”

In describing the “new reality” as “an opportunity for Labour to achieve more, not less”, he will outline how a future Labour government will deliver fairness:

“I want to explain the principles which will guide the Labour Party under my leadership so that we can rise to the challenge of those who say that Labour is only a party for good times.

“I want to talk about three new ways of delivering fairness in difficult times when there is not much money around.

“First, reforming our economy so we have long-term wealth creation with rewards fairly shared. Second, tackling vested interests that squeeze the living standards of families across our country. Third, making choices that favour the hard working majority.”

Miliband is adopting all the High Pay Commission’s proposals. If Cameron’s plan fails to curb excess, Miliband must go further. He should certainly support those dangerous lefties, Merkel and Sarkozy, on the Robin Hood transaction tax: watching them go it alone shows how wrong Cameron was to claim this was an EU conspiracy against the City.

Hard times need create no “crisis of social democracy”. In Attlee’s postwar days of atrocious austerity, Labour produced its best policies – and so Miliband lays out reasons why fairness matters most when money is short. His “responsible capitalism” may look ever more essential by the end of this economically threatening year.

There is nothing anti-business about cleansing cheats, asset-strippers and vultures from honest savings and good business enterprise: Cameron has been forced to agree.

Miliband has forced this onto the agenda; he needs to keep running with it and make this ground his own.