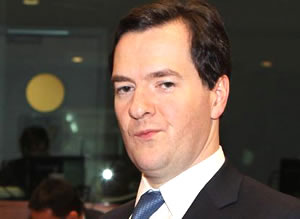 A year ago economists were too optimistic about the outlook for the UK economy.

They expected a drag on spending from the increase in the standard rate of VAT to 20 per cent and from public spending cuts, but most thought the economy would expand at an annual rate of around two per cent in 2011. The outturn is likely to be less than one per cent.

• First, they failed to foresee how high oil prices would rise in the first half of the year. This pushed up petrol prices and heating costs and squeezed households’ spending power.

• Second, they did not expect the euro zone sovereign debt crisis to worsen to the degree that it did. This affected the outlook for businesses in the second half of the year.

• Third, they misjudged the negative effect on confidence in the private sector of cuts in the public sector. This caused companies to hold back investment spending and hiring.

Together these three factors brought the economy to the brink of recession. 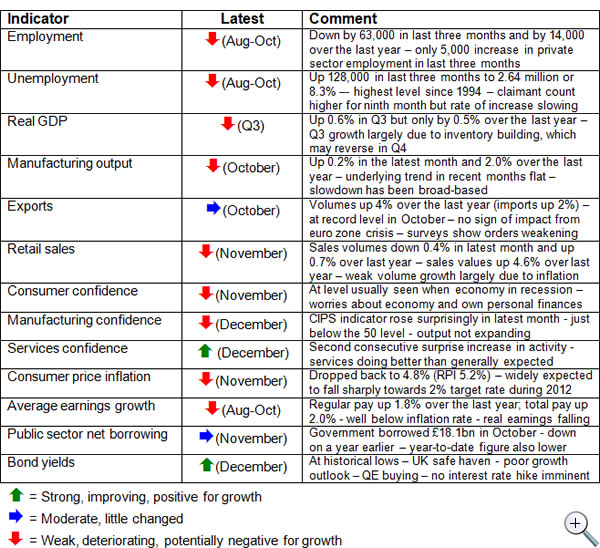 Growth fell well short of economists’ forecasts made at the start of the year; inflation and unemployment both ended the year higher than expected; and public sector borrowing was also higher.

Just about the only good news was that the current account deficit is likely to be smaller than forecast, though as this is largely due to weak import growth, which in turn reflects the weakness of the economy, it is no real cause for celebration.

As we enter 2012, the outlook for the economy appears bleak. Public sector austerity continues at home and the euro zone debt crisis is unresolved, creating great uncertainty for companies that have trade links with our European neighbours. International bodies like the IMF and the OECD believe the euro zone is back in recession and that the UK is teetering on the brink of following it.

The outlook is not all bad.

Oil prices, though volatile, are not trending higher as they were a year ago and global food price inflation has also eased. Forecasters, including the Bank of England think inflation will be close to its two per cent target rate by the end of the year.

This will ease the squeeze on households’ spending power. Meanwhile, interest rates are likely to remain at just 0.5 per cent, bond yields are at historical lows and the Monetary Policy Committee has increased the scale of quantitative easing to £275 billion.

A serious worsening of the euro zone crisis could lead to another credit crunch and deep recession. But, if this is avoided, the UK economy seems more likely to continue growing, albeit at a disappointing pace and one that is not fast enough to reverse recent increases in unemployment.

As a result the latest annual growth rate was unchanged at 0.5 per cent. Higher inventory building accounted for all of the growth in GDP in the third quarter (an increase in fixed investment being offset by weaker net exports).

If this inventory building was involuntary, as seems likely given the deterioration in economic sentiment during the autumn, it will reverse in the final quarter, subtracting from growth. This will make it very difficult for real GDP in aggregate to expand.

The difference is inflation on the High Street of close to four per cent. Monthly data throughout 2011 have shown annual growth in sales values of between four and five per cent, despite increases in average earnings of close to two per cent and, recently, higher unemployment.

Households have not deserted the shops, and weak sales volumes are the result of higher inflation.

3. Saving ratio stable, real incomes down: This impression of households being willing to spend but finding their money goes less far is confirmed by the latest national accounts data.

These show the saving ratio is little changed over the last year – it is actually down from 7.0 per cent to 6.6 per cemt – while real disposable incomes (a measure of households’ purchasing power, after allowing for taxes and inflation) fell by one per cent. As a result, total consumer spending, in real terms, fell by one per cent. 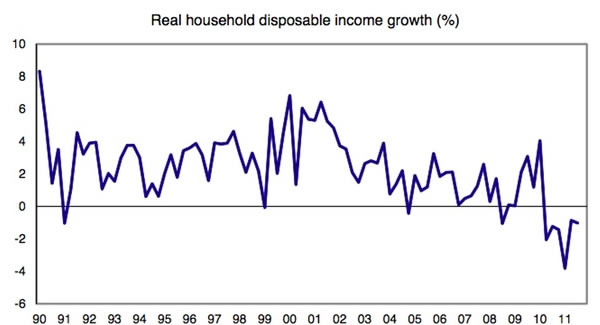 4. Consumer confidence is at levels associated with recession: Both the main surveys of consumer confidence in the UK show it to be at very depressed levels. The Nationwide survey actually showed confidence edged a little higher in November but worries about the general economic situation and personal finances persist.

Meanwhile, the GfK NOP poll found confidence at its lowest level since early 2009, when the economy was still in recession.

5. Business surveys improve in December: The purchasing managers’ surveys of confidence in manufacturing, construction and the service sector all showed surprise improvements in December. The manufacturing index increased from 47.7 to 49.6 – just below the crucial 50 mark that is supposed to indicate the sector is expanding.

Meanwhile, the service sector index rose from 52.1 to 54 – its highest level since July. Amid all the gloomy talk about the UK economy, these three surveys – taken together – suggest the outlook might not be quite as bad as feared.

However, output has not increased in the last six months. The slowdown is broad-based and not just due to the problems of one or two sub-sectors within manufacturing. Only in the transport and ‘other’ categories is output growing at a more rapid pace.

There are now 4.14 million self-employed people in the UK – the highest number since records began in 1992 (and in all probability the highest ever).

It is not clear whether this shift into self-employment is voluntary or the result of insufficient employment opportunities. In the three months to September, employment in the public sector contracted by 67,000 and fell below 6 million for the first time since 2003. Meanwhile, private sector employment increased by just 5,000.

Over the last quarter – to the three months ending in October – it has increased by 128,000. The claimant count measure has gone up for nine consecutive months, though in recent months the scale of the increase has been falling and in November it was just 3,000.

Alongside the business survey evidence for December, this is perhaps another reason not to get too gloomy about the economic outlook.

Forecasters, including the Bank of England, think inflation will be close to its target rate of two per cent by the end of 2012 and, while their track record in recent years has not been good, there is nothing in the latest data to suggest an alternative outcome is more likely. This will ease the squeeze on households’ purchasing power. 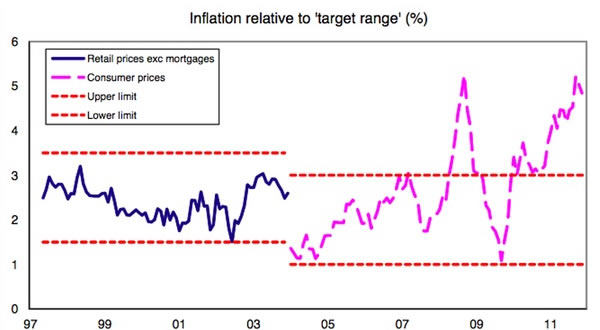 10. Wage inflation stuck close to two per cent: Average earnings increased by 2.0 per cent and regular pay by 1.8 per cent over the year to the three months ending in October 2011.

Despite higher price inflation, annual wage increases have fallen slightly in recent months. Increases in manufacturing, while still lower than in the service sector, have been improving, while increases in finance and business services have fallen, though at 3.4 per cent for regular pay they remain well above average.

11. Government borrowing is below last year’s path: Public sector net borrowing (excluding financial interventions) was £88.3 billion in the first eight months of the financial year, down from £98.7 billion a year earlier.

In part, this reflects the UK’s position as a relative safe haven, compared to the euro zone. But the poor outlook for growth and the improving outlook for inflation, Bank of England buying of bonds to implement quantitative easing, and the ever-receding prospects of higher interest rates in the UK also help to explain why yields are at historically low levels. 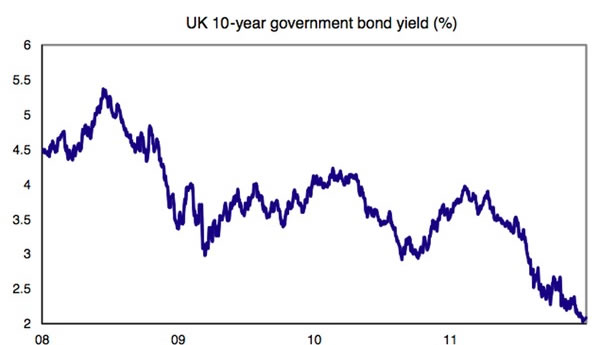 7 Responses to “Economic update – January 2012: Outlook not all bad”