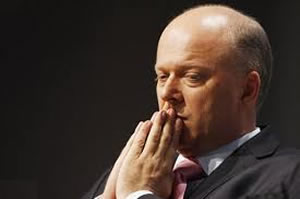 Explaining campaigners problems with an aspect of the bill which introduces means-testing for children disabled from birth, Marsh said:

“What that amendment was actually about, we felt, was that children who were born profoundly disabled, who might not be able to work when they get older, should have an entitlement when they reach adulthood to an independent income. They shouldn’t have to rely on parents or family to look after them.

“If you’re born that profoundly disabled, you should have an income in your own right.”

Maitlis’s response to Marsh was to accuse her of ‘demonising’ the government:

“And it’s very easy, isn’t it, to demonise the government over such an emotive issue as this, when the government has clearly stated that for cases of long term chronic illness, the support group will not change its benefit structure.

“This is only about people who presumably you would want to see getting back to work.”

Grayling, meanwhile, was free to spin about the success of the government’s “revolutionary new work program” without addressing the fact that this is the same work program that forces people to work for just £1.78 an hour.

Watch the debate in full:

And read a transcript of the full exchange:

Emily Maitlis: “[Liam Byrne] said you were “crossing the line of decency”. Is it more important for you to save money even if you face that kind of accusation?”

Chris Grayling: “I think he’s just plain wrong, and I think that the Labour party last week, Liam Byrne personally was talking about the need to take tough decisions on welfare, and this week he’s doing just the opposite. And lets be clear about what we’re not doing. We are not taking away benefits from people who have no other income.

“We are not taking away benefits from people who are not going to be able to work again. We are making changes for people who’ve got another income, or who’ve got thousands of pounds of savings in the bank.

“So that’s the principle of what we’re doing.”

Maitlis: “Sure. And that was presumably understood pretty well by those in the Lords. Lord Patel, though, was saying he is sympathetic to cutting the deficit, but highly sympathetic to something that will make the lives of weak and vulnerable people even more miserable. I mean, this is why it’s being shouted down now.”

Grayling: “Well, if you take the example of one of the amendments last night, on young people, what we’ve got is a situation right now where if young person reaches adult life, and they have other financial means, they could receive for example a substantial inheritance, they’re still able to unconditionally receive benefit support for an ongoing period.

“Now, if they’re never going to be able to work, the situation won’t change for them.

“But if they are in the position where with the right help, and through our work program we’ve put in place specialist support to help people who’ve got the potential to return to work to do so, then I don’t think it’s right that somebody who’s got other financial means should depend on taxpayers, who are on relatively low incomes themselves very often, to pay the money to help people who’ve already got money themselves.”

Maitlis: “And Sue Marsh, what’s so wrong with that?”

Sue Marsh: “What that amendment was actually about, we felt, was that children who were born profoundly disabled, who might not be able to work when they get older, should have an entitlement when they reach adulthood to an independent income. They shouldn’t have to rely on parents or family to look after them. If you’re born that profoundly disabled, you should have an income in your own right.”

Grayling: “But for those children in a position where they’ll never work, they’ll be in, on employment support allowance in what’s called the support group, which is something we’ve increased in size, we’re providing more long term unconditional support than the previous government.”

Marsh: “This is about national insurance credits…”

Grayling: “Then those people won’t be in a different situation. Their situation won’t have changed.”

Maitlis: “And it’s very easy, isn’t it, to demonise the government over such an emotive issue as this, when the government has clearly stated that for cases of long term chronic illness, the support group will not change its benefit structure. This is only about people who presumably you would want to see getting back to work.”

Marsh: “First of all we don’t think enough people are going in to the support group, that’s one of the big flaws with the employment and support allowance. We don’t feel that enough people with long term conditions are getting that unconditional support.”

Maitlis: “So that’s not about an actual, an amendment to a reform…”

Marsh: “No, the amendments to the reforms yesterday, I mean we were sitting there watching the debate, and one of the debates was about how terminally ill you have to be to qualify for benefits. Being terminally ill for six months, that was OK, you would get some support, unconditional support.

“If you were terminally ill for three years, or four years, you weren’t going to get that support. I find it shocking that I’m living in a country where I sit there and hear ministers or lords arguing over how terminally ill you have to be to get benefits.”

Maitlis: “If we didn’t have a deficit problem, would you still want to bring about this kind of reform anyway?”

“The point about the support group, the long term group, who do receive unconditional support from the state, we’ve grown that in the past year, it’s bigger than it was when we took office, we’ve introduced conditions that are consciously intended to make sure we provide better support for people who’ve got long term mental health problems.

“But yes of course we’re having to take tough decisions because of the deficit, we’ve got to do that across a whole range of different areas, and yes there are things we are having to do which we’d rather not have to do. We’re certainly trying to get the balance right.”

Maitlis: “And it would be very easy, wouldn’t it, to say once somebody has been classified as disabled or a chronic sufferer they need never be assessed again. That might not be helping either the state or the individual.”

Marsh: “That wasn’t what the debate was about, though, yesterday. We weren’t talking about assessments. One of the other votes that failed was for a one year time-limit on employment support allowance.

“Now, introducing a one-year time limit means someone like me who’s been ill for 27 years, I’m now going to be, after one year if I don’t go into that support group, entirely dependent on my husband, who doesn’t earn very much, to survive.”

Maitlis: “But you heard that there are increasing numbers of people on disability benefit now, they don’t want to live on it, they want to come off it presumably, and be back at work.”

Marsh: “And that’s fantastic, that’s absolutely fantastic and there’s no problem with that at all.”

Maitlis: “But do you see the problem with that if there is no kind on means assessment at all?”

Maitlis: “Chris Grayling, we’ve seen a lot of U-turns already from your government. Successive governments have tried and failed on welfare reform, you’ve already been defeated in the lords, you’ve got legal challenges with the unemployment benefit cuts, are you starting to realise why nobody ever manages to do this?”

Grayling: “Well, we are going to do this. This is part of a transformation of our welfare state that is really necessary.

“In many of our communities now we’ve already got long-term endemic worklessness that has gone from generation to generation, we have an appallingly low level of people with disabilities in work, what we’ve done with our revolutionary new work program, on a payment by results basis, we’ve got organisations that are delivering personalised support from long term benefit dependency, they have the freedom to do what works and we only pay them when they’re successful.

Maitlis: “And you sound very certain that you would pull this off. We’ve already heard David Cameron hint that child benefit might be relooked at.

‘We’d always said we’d look at steepness of the curve, look at the way its implemented.’

“This is something that you introduced at the Tory conference before last. The Telegraph is leading on this rethink of child benefit cuts – that’s going to change now, isn’t it?”

Grayling: “I mean first of all in terms of our welfare reforms there’s no u-turns planned, I’m in the position where child benefit’s done by the treasury as part of the budget preparations, so I don’t know what the treasury are doing because I’m in a different department.”

Maitlis: “Would you be surprised if there was a rethink on child benefits?”

Grayling: “I’d be surprised if we saw a major U-turn on child benefit…”

Maitlis: “But you wouldn’t call it a major U-turn. Would you be surprised if there was a change to that policy now?”

Grayling: “We will always, with every policy, try to implement it in as sensible a way as possible. But I’ve heard nothing to suggest that we’re about to change direction massively on child benefit. But no, the prime minister said he would be careful and thoughtful about how we do it, and try and make changes as efficiently and effectively and fairly as possible.”