Daily Express editor Hugh Whittow today told the Leveson Inquiry the paper withdrew from the PCC because it failed to stop them publishing defamatory material about the McCanns. 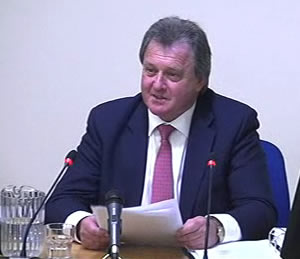 The editor of the Daily Express today told the Leveson Inquiry the paper withdrew from the Press Complaints Commission because it failed to stop them publishing defamatory material about the McCanns.

“Because of the McCanns I think that was a huge problem for us and I think they should have intervened… No one was intervening at all. Everybody had too much leeway, it just went on and on.”

When asked by Robert Jay QC whether he was seriously saying the Express left the PCC because it didn’t stop them printing defamatory articles, he repeated his extraordinary answer, adding:

“I don’t blame the PCC. I just think in hindsight they might have been able to intervene and perhaps this will reflect in the body that you set up.”

He was then quizzed on a number of seriously misleading front page headlines in the Express, including:

While it would be fair to assume that 75 per cent had expressed some scepticism of the EU by indicating in this poll that they would either vote to leave the EU or to renegotiate the terms of our membership, it isn’t true that three quarters support withdrawal.

In fact, when the terms of the referendum are reduced to a simple ‘in/out’ choice, just over half would vote to leave.

While on the ‘chippy salt ban shocker’, Roy Greenslade wrote:

“Salt shakers are being removed from fish and chip shops in a nanny state ruling on what we can eat” – that’s the intro to this splash in today’s Daily Express.

“The petty diktat is supposed to be part of a healthy living drive to lower salt consumption which has been linked to high blood pressure.”

Hang on. Does that mean every fish and chip shop across the nation? No, two paragraphs on we discover it is an initiative by Stockport council.

Does it mean that shops are banned from placing salt shakers on their counters and tables?

No, but you have to read between the lines because it transpires that it is a voluntary scheme called “out of sight, out of mind”. And five Stockport shops have signed up for it.

Yet an Express editorial, headlined ‘A chip on their shoulders’, says: “For Stockport council to force food outlets to withdraw salt from view is daft”, adding:

“Any council official turning up at a fish and chip shop to check the ban is being enforced rigorously may run the risk of getting battered.”

But no official will be turning up – because it isn’t a ban, there is no “diktat”, there has been no “force”. In fact, it is not even a Stockport council decision.

Whittow returns to give evidence after lunch, at 2:00, while last up today is Richard Desmond, owner of the Express. You can watch all the action here.

13 Responses to “Express editor: We left PCC because it failed to stop us lying”